Too Few Women at the Corporate Level of Casinos 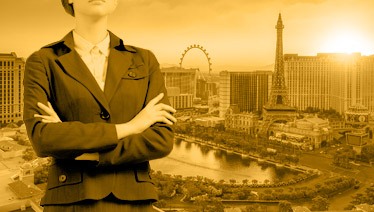 It's not just about the money. For years, the disparities were explained away as a “natural byproduct” of an industry that isn't “good fit” for women. The traditional image of a gambler is that of a male and since women aren’t as interested in gaming and technology (so went the explanation) the pool of potential leaders isn’t big enough.

Ironically the gaming industry shows one of the smallest  gender pay gaps of any industry for the casino workers. Nevada is actually tied with Connecticut as the state with the smallest gender pay gap. Unionization, which is a big factor in the gaming industry, uses its collective-bargaining agreements to help ensure that employees receive comparable pay when they perform similar jobs and have similar seniority.

People who advocate for more women in decision-making positions note that social equity can be achieved through visionary leadership. They admit that in order to bring more women into these roles in the gaming industry it needs to be done by  setting highly visible goals for the industry and involving visionary leaders.

They suggest that the  industry needs to set specific goals for the percentage of women on boards of directors and in top executive positions. Annual reports should measure performance.

For instance, recently, 29 companies, including Microsoft, Target, Apple, Facebook, General Motors and Visa signed a pledge to close the gender pay gap for their employees. Nevada’s gaming industry could follow this example. It's time for them to commit to meet tangible goals for the number of women in senior leadership positions and boards of directors.

In an industry that is renowned for its vision, it will be interesting to see which  companies take the lead in bringing more women into top positions. Which CEO will hire women in top executive positions? Which board of directors will commit to hire more women in leadership positions?

It's a bit ironic that the gaming company that was under heavy criticism due to charges that its CEO was a serial sexual harasser is taking the lead. Steve Wynn, disgraced founder and ex-CEO of the company, was forced to step down but his ex-wife has regained her influence in the company and she is pushing the envelope to bring more qualified business professionals into the company. Those professionals just happen to be women.

Within weeks of settling a court case with her ex-husband and becoming the majority shareholder in Wynn Resorts, Elaine Wynn has brought three new board members onto the Wynn Resorts Board of Directors. Dee Dee Myers, Betsy Atkins and Winifred "Wendy" Webb will join current member Pat Mulroy to complete a board that now has a 11% female membership.

In addition to sending a pro-feminist message about the company's commitment to its female employees and customers, the move places the company in the role of an industry leader. Ann Sheehan, former member of the Security and Exchange Commission’s Investor Advisory Committee, applauds the move.

“I think it’s important for this board to rebuild the trust with their shareholders and to send a message that they have a handle on the situation. It’s a very valuable brand and a very good company. They’ve got a long future ahead of them and I think with these new board members, they will continue to freshen and strengthen the oversight of the company going forward.”

Observers believe that Wynn's inclusion of such a high percentage of women on its board will also send a message to other gaming companies.

Matt Maddox, CEO of Wynn Resorts and Steve Wynn's successor, said the board additions represent “meaningful change” for the company.

“These appointments signify a turning point for us and I look forward to working with each of our new directors as we usher in a new era at Wynn,” he said in a statement.

The Wynn Board's non-executive chairman Daniel Boon Wayson expanded on Maddox's statements. “To be clear, this is the first step in our effort to refresh the board. We intend to add additional new directors in the coming months. The board is committed to enhancing value for our shareholders, delivering superior experiences for customers and creating a supportive and inclusive environment for all of the company’s employees.”

Wynn Resorts, under the leadership of Matt Maddox since December 2017, has  initiated new programs and departments to address diversity, fair treatment, gender equality and female leadership.

The issue of gender equality in the higher echelons of the gaming industry is moving front and center. Even with the new Wynn board members the situation is unacceptable to activists who promote a more inclusive environment for women in the business worlds' top offices

Marybel Batjer, who worked for eight years as a vice president at Caesars Entertainment  and is presently secretary of the California Government Operations Agency, says “It’s pervasive…I think many of us have known that it has been and we’ve poked along at change, but now change may finally come.” Batjer points out that the predominance of males at the top level of the companies executive supports that mindset. “In the gaming industry, it’s usually women who are more likely to be afraid — afraid of their job, afraid that there’s no place to go to report, that they won’t be listened to, that they’ll just be let go.”

But Batjer and Blackhurst say it's necessary to eliminate the gender-disparity gap in order to create the culture change that's necessary to  prevent those misdeeds. In other words, companies should commit to equal representation down the corporate ladder.