Tribal Casinos, Taxes and You! 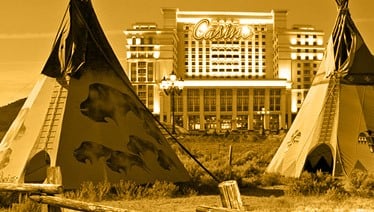 The relationship between the federal government and tribal casinos has always been filled with tension. The sides often turn to the courts to help navigate the rights and responsibilities of the feds and online Vegas games that are operated by Native American tribes at their casinos.

Over the last 4 decades casino gambling has become an interregnal component of many tribal economies. It often falls to the courts to decide how much autonomy the tribal economy has as they develop  casino entertainment.

One recent case raised the question of whether revenues from Indian casinos were taxable. Defendant Sally Jim, a member of the Miccosukee Tribe, received $272,000 in disbursements from Miccosukee Indian Bingo and Gaming. Jim declared that, since this payment came from her tribal casino, it was untaxable but the US Appeals Court ruled that the federal government has the power to collect taxes from tribal casinos, including from individuals who benefit from casino disbursements.

The Court of appeals upheld the decision of U.S. District Judge Cecilia Altonaga which declared that defendant Sally Jim was liable for taxes on  $272,000 in disbursements that she had received from the Miccosukee Tribe in 2001.

The three-judge Eleventh Circuit panel also agreed that the Miccosukee Tribe may likewise be held liable for failing to report and withhold  gaming disbursements and receipts from the tribal-operated Miccosukee Indian Bingo and Gaming Center. According to Judge Gerald Tjoflat, “when an Indian tribe decides to distribute the revenue from gaming activities … the distributions are subject to federal taxes.”

This case is only the latest round in a fight between the IRS and Indian tribes which operate casinos on their reservation lands. The tribes claim that tribal revenues are precluded from obligations to pay taxes while the  federal government believes that the 1988 Indian Gaming Revenue Act (IGRA) gives it the right to collect taxes on these activities.

In his ruling, Tjoflat wrote, “[P]er capita distribution of gaming revenue remains taxable income, even if the distribution arguably promotes the welfare of a tribe. The distribution payments cannot qualify as Indian general welfare benefits under the TGWEA because Congress specifically subjected such distributions to federal taxation in IGRA.”

Jim isn't prepared to go down without a fight. She intends to appeal to the United States Supreme Court, based on the Tribal General Welfare Exclusion Act (TGWEA) which, she claims, supersedes IGRA. Under the TGWEA, taxation on tribal revenues is precluded. Jim's attorney, Miramar Solo Robert Saunooke, is prepared to go with Jim to the SCOTUS with the argument that tribes have the right to collect and distribute revenues that they acquire from their tribal casinos without being taxed.

Neither the Federal Government nor the Miccosukee Tribe have yet to comment formerly on the ruling.

When it comes to the relationship between the federal government and  issues of  taxation and sovereignty, the courts, which are often the address of last resort, are not always consistent.

Three years ago, a federal appeals court ruled on a dispute that arose between the state of Florida and the Seminole Tribe. The court heard the case which involved rental and utility taxes on tribal property and then ruled that the state is barred from imposing a real-estate rental tax on businesses – including non-Seminole businesses -- that operate at tribal casinos in Hollywood and in Tampa.

The court also rejected a tribal challenge to taxes collected on electricity that's used on Seminole property. In that ruling the court declared that taxes could be declared on utilities that are used to operate the casinos.

In the rental-tax issue, the tribe signed leases with two companies, Ark Tampa LLC  and Ark Hollywood LLC, to provide food-court services at the Hollywood and Tampa casinos. The Seminoles contended that the 6% tax that the state generally collects on these services is prohibited based on federal laws that declare the tribal lands on which the casinos are located to be sovereign.

In the ruling, the court said that the Florida Department of Revenue could not justify the rental tax by pointing to infrastructure and services that the casino receives from the state. The court found that the business of renting commercial property at the Seminole facilities was not tied to any services provided by the state.

In that ruling, judges Robin Rosenbaum, Beverly Martin and L. Scott Coogler wrote "Florida has not shown that the rental tax is designed to compensate for any state services or regulations related to the act of renting of commercial property on Indian land; rather, the interests the state advances are more akin to raising revenue for providing statewide services generally.''

However the court agreed with the Department of Revenue that the tax is not imposed directly on customers but rather on the utility companies. The court also  sided with the state on the issue of utility services, commonly known as a "gross receipts tax" on utility services. The tribe argued that the tribe would ultimately have to pay the state tax since it's generally imposed on utility companies.

Addressing that question the court ruled that "although an itemized amount of the utility tax becomes a component of the consumer's bill that is, in a sense, transmitted by the utility to the state once collected, it is key in our view that nothing about this section (of state law) requires a utility provider ever to itemize the tax. Ultimately, then, there is no requirement from the Legislature to pass the tax through to the consumer, and it is the requirement that matters."