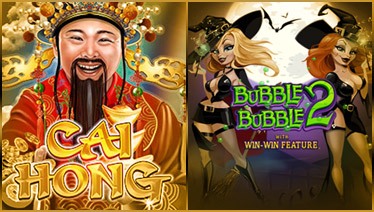 Bubble Bubble is a Halloween-themed slot machine that features 5 reels and 50 pay-lines. Game symbols include witches, books of spells, scary goblins, witches' brews, black cats, lurking ravens and more. The reels are set against the background of a dark and gloomy cemetery between two concrete gate columns.

Winnie the Witch is the Wild symbol. She appears on the third reel during the base game and can substitute for any other symbol except for the Scatter to complete a payline and signal a win. Winnie is an expanding Wild – when a Winnie symbol appears it expands and covers the whole reel so it completes more winning combinations. If a Winnie symbol appears in a winning combo then the win is multiplied 3x.

The Scatter symbol is a boiling Cauldron. Multiple cauldrons form scatter wins which are multiplied by the total amount wagered. If you land 3 or more scatters, you open the extra games – there are 3 bonus games and the game that you select indicates your next move. Bonus games include additional features – the Wild Witches feature, the Great Ghosts feature or the Bewitched feature.

Cai Hong, the Chinese rainbow, brings you into an exciting slot machine adventure of fun and excitement. In English, Cai Hong means "rainbow" and the rainbow-themed game is meant to lead you to a pot of gold via spins, free spins, multipliers, wilds, scatters and more.

Game symbols include dogs, oxes, roosters, tigers and rabbits. These are the symbols that denote the luck that Chinese calendar years bring under the watchful eye of Caishen, the smiling God of Wealth. The Cai Hong wild symbol doubles payouts up to 5000 times the triggering bet and the Caishen symbol acts as a scatter to deliver scatter wins and take the player to the main bonus round.

Throughout the game the symbols can be seen against a cloudy sky with a  delicate red latticework frame that adds to the atmosphere of Asian calm amidst excitement. There are five reels, crossed by 30 fixed paylines. That means that all the lines are active at all times so there's no need to enable individual paylines.

If 3 or more of the same type of symbol are seen in an unbroken sequence running across a line from the left side you win a prize to be paid when you see the traditional playing card symbols 9, 10, J, Q, K and A.

When animals land across a line along with gold coins the wins increase. If you achieve a gold ingot you'll have the most valuable base game icons and will receive the highest wins.

The rainbow scatter symbol triggers the free spin feature whenever 3 or more scatters appear simultaneously on the reels.  You'll be shown a series of lucky coins, and it’s these that give the Cai Hong video slot the special ability to grant happiness and wealth.

In the free games each win-line is multiplied by 15x while 3 or more scatters, appearing during a free spin, will result in an extra 15 spins added on to the end of the feature. You might find a big pot of gold at the end of the rainbow scatter symbol.