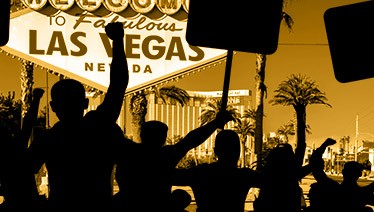 Even though Nevada is a “right to work” state where unions have little legal influence, a union presence among Vegas casino workers is growing. Last year’s strike by members of the Culinary and Bartenders Union almost brought activity in the casino capital to a halt. By the strike’s end, the unions were able to negotiate a strong contract that went a long way to protect their members.

Now an additional 550 gaming dealers from Las Vegas’s Caesars casino are have voted to become part of the UAW which includes dealers from across the country including from Harrah’s, Paris, Wynn and Baily’s casinos. The UAW, which once focused on representing Detroit’s auto workers, is ready to protect the casino workers’ interests.

Vance Pearson, director of UAW Region 5, welcomed the new workers into the union. “We welcome these workers into the UAW family and look forward to getting down to business and bargaining great contracts,” he said.  Gary Jones, president of the UAW, expanded, saying “We are thrilled to have Caesars Palace gaming dealers vote to be allowed to join what are now over 10,000 casino workers in the UAW. In just this past week the UAW has welcomed over 2,000 new Las Vegas casino workers.”

Vegas and the Unions

It’s surprising that the unions are so strong in Nevada, a “right-to-work” state where union-represented workers have the option to  get out of paying dues, regardless of whether or not the union is bargaining on their behalf. Unions in right-to-work states typically wield less power but in the casino industry, things are a bit different.

One of the strongest unions is the Culinary and Bartenders Union which now represents 57,000 workers at the majority of hotels and casinos both downtown and on the Strip. The right-to-work law means that any worker can opt out of supporting the union through their paycheck. In Vegas, over 95 percent of casino employees have chosen to pay full union dues to ensure that the unions stay strong.

One example of the power of the unions in Las Vegas involves the recent strike of the Culinary and Bartenders Union. The union flexed its muscle in last summer’s contract talks and came out ahead. The union, which represents 50,000 workers at 34 properties, was negotiating for better wages, more job security and the institution of a formal complaint committee that would have the authority to address complaints of sexual harassment.

As the previous contracts neared their expiration date in June 2018, the union successfully demonstrated widespread unity among the workers who authorized their union to declare a citywide strike.

The strike had the potential to disrupt the entire local economy and the threat led to a quick capitulation of the casinos which almost uniformly agreed to 5-year deals that met almost all of the union’s demands. Ruben Garcia, an expert in labor law at the University of Nevada, Las Vegas School of Law, commented “There’s just a real willingness to organize and to constantly be organizing.” said.

The union has created a situation in which the city’s hospitality industry can’t function without its support.

The union’s Las Vegas success is gives hope to unions across the United States. Federal and state policies have become more hostile to organized labor in recent years and right-to-work laws are spreading – such legislation is now law in 28 states. Meanwhile, an upcoming Supreme Court case, Janus v. AFSCME Council 31, might make the entire  U.S. public sector right-to-work if SCOTUS rules against the unions. That would deliver a severe blow to the unions.

That’s why all eyes are on Las Vegas. If the unions can thrive in such an unhospitable climate, they can succeed elsewhere.

In Las Vegas, the union is blending unionization campaigns at non-union properties with the ongoing organizing within their current membership. Workers have the option to refrain from paying dues. However, through engagement with members and providing proof that it’s a valuable commodity to the people that it represents, the unions are succeeding in attracting supporters who pay dues happily.

One of the union’s strategy’s involves cultivating leaders inside the casinos. They also try to get the rank-and-file members involved in organizing drives, in political causes and in mobilizing to win solid contracts with strong pay and benefits. They are aiming to demonstrate the advantages of being in a union to their members.

“We don’t know any other way,” said Geoconda Arguello-Kline, the union’s top official. “For us, it’s a very natural way to survive here in Las Vegas: organize, organize.” In addition to negotiations with the casino operators the union also tries to help people find jobs and assists members in obtaining the health care coverage and the compensation benefits to which they are entitled. Off-site members are active in unionizing employees at other casinos and restaurants.

The union also helps non-members. When they non-members see what benefits they get from the union they almost always become members, even though it involves a $60 membership fee. “Ninety-nine times out of a hundred, they will end up needing the union’s help” one local organizer said. “We’ll do that for them, and that speaks volumes.”

According to the union, most casino workers earn $23 per hour in pay and benefits, including an employee-funded pension and a generous health plan. Through the union’s health fund, members receive family coverage with no monthly premium. Last year the union opened its own health clinic where members and their families can receive treatment. Members also have access to benefits of the housing program which has already distributed more than $4 million toward down payments and closing costs.

The employers also benefit from their relationship with the union. They get a professional, well-trained workforce with low turnover. The casinos run a joint culinary program, the Culinary Academy with the union. The culinary course helps workers upgrade their skills – barbacks learn bartending skills, bussers can become servers, etc. Food servers have a 152 hour long course that trains them to be professional servers, a skill that they can use elsewhere if they decide to leave the area.

Leain Vashon, union vice-president, said, “Even though this is a right-to-work state, people who work here understand that the Culinary has made a living wage possible, Even the people who are not in the union only get a great salary because of the Culinary.”

The Culinary and Bartenders Union, known as “The Culinary” is the largest and most influential union in Las Vegas. It’s become the Democratic party’s most valued resource in the southwest where it functions as a get-out-the-vote machine for the party in state and federal elections. “They’ve made themselves very important to the political powers that be,” said UNLV’s Garcia.

The union also operates as an immigrant rights group which hosts citizenship drives and helps immigrants navigate bureaucracy in the state.

Union members are, by and large, grateful to the Vegas unions’ power and strength. “Just because you have it OK doesn’t mean you will even tomorrow. That’s how much you walk on eggshells at a non-union property” said one casino worker. “I appreciate the people who did this before me. I’m doing it because it’s the right thing to do.”