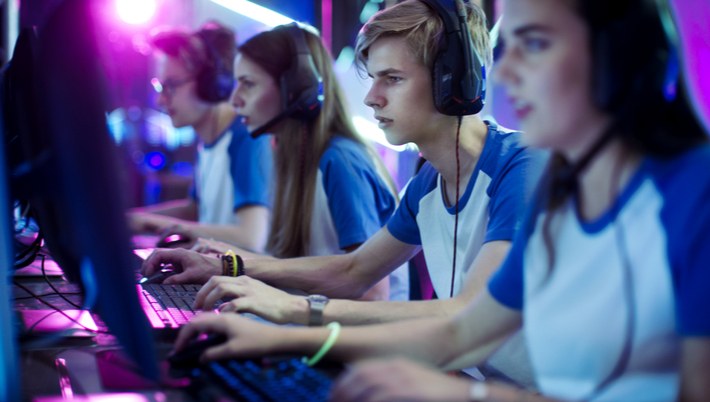 Throughout the last decade Vegas casino esports have become an important resource for universities looking to increase capital. This has become even more true over the last year with esports being one of the few minimal risk sports that universities can run with relative safety. eSports have helped to keep investment in professional and college sports alive – globally, $20.3 million was invested in esports acquisitions, mergers and improvements.

In addition, more than 22 states have legalized sports betting. There are bills to legalize sports betting pending in another 9 states. With traditional sporting events facing postponed and cancelled games, esports on all levels has become an important part of sportsbooks’ activities.

Since 2018, sportsbooks’ revenues for gaming were growing at almost 10 percent each year and the pandemic pushed that percentage upward to over 11 percent. Gross win from esports wagering is expected to reach 39 percent this year for a total of USD343 million.

All analysts expect that esports will continue to grow. eSports betting may very well continue to dominate the market when the pandemic subsides. Licensing authorities report that they have been receiving more license applications with many of the new licenses being for sportsbooks that target a young millennials and Generation Zers by focusing on esports. Mobile gaming and viewing is also driving the growth of esports betting. With so many retail casinos and gambling venues closed, mobile betting has grown and now account for 80% of the betting market in many regions.

There are 50 university esports programs in the United States that are of a high enough quality to compete globally. China is boosting its higher education system to accommodate the growing national demand for workers for the esports industry which will, estimates say, add another 260,000 jobs to the economy in the coming years. In the UK, universities offer both bachelor’s and master’s degrees in esports.

In all countries, the majority of esports players, viewers and industry workers are men. Analysts estimate that only 5% of league participation involves women. Critics are calling on the universities to take a leading role in increasing diversity in the industry by bring in more women. Universities, they say, should be building professional and educational models that focus on including mechanisms that provide more opportunities for more female participation. Some universities have, in fact, started to work on establishing a more diverse environment but that is still the exception to the rule.

It’s an oversimplification to say that the presence of female players in professional and university leagues is just a “gender issue.” Many observers believe that the lack of gender diversification comes from the way that the esports programs were built from the ground up as based on the research that led to the foundation for building training programs and leagues.

According to Bo Ruberg, professor of Digital Games and Interactive Media at the Irvine campus of the University of California, many academicians aren’t aware of their biases. eSports is more than a business instrument or an educational tool. It’s a dimension fair play, a sense of community, and emotional intelligence can and should be built. At the university level, the intention should go beyond increasing university enrollment and growing economic potential. It should promote equity and diversity.

Professor Ruberg commented that the approach is practical “if the intention is only to grow eSports' economic potential and exploit their usefulness in increasing university enrollment. However, it does not do much for diversity and equity in the spaces that the discipline creates…..I think it's worth thinking about who you loop in when you want to make more people feel safe and welcome. Business isn't the opposite of diversity, right? It can be part of the equation if you bring it into consideration."

Professional organizations and educational institutions respond to the charge that not enough is being done to  increase the presence of women in varsity and professional eSports leagues. Selection is based on the person’s skill level, they say, and not on factors such as ethnicity or gender.

Ruberg notes however that social aspects that could affect the performance and presence of social minorities is absent from the structure on which esports is built. That means that minorities don’t have the same opportunities to develop the kind of skills that players in the dominant social group enjoy. Minority players face obstacles to their inclusion including belonging to the uniform social structure of esports players – males with similar social profiles.

The esports social structure is highly stratified. Male players who have similar social profiles dominate and anyone who does not belong to that group is an anomaly. As “outsiders,” these  strangers aren’t welcomed into the system and so they miss out on many of the perks of belonging that players who are accepted into the dominate group enjoy.

If universities are to fulfill their roles as promoters of inclusion and diversification, they need to do a few things. One of those involves confronting that cyberbullying that takes place in gaming communities against women who venture into the arena.  Sexual and gender-based harassment is prevalent in these spaces and it helps maintain a dynamic that allows female players to be excluded.

The main problem is the language of players who are part of the dominate demographic in the esports community is often inappropriate. Comments by viewers and followers can be belligerent, hurtful or hostile and a structure or dynamic that incentivizes inclusive, neutral and friendly use of language must be put into place so that competition doesn’t become confused with denigration.

Female gamers of color are especially prone to undergoing such harassment. Alexandra Cata, a Ph.D. student in rhetorical communication and digital media at North Carolina State University studies language and its impact on the esports community. Cata points out that  if proper language is used, it generates a space where knowledge can be shared which, in turn, results in players’ confidence and the development of a sense of community.