USA Slides into Place as a World Gambling Capital 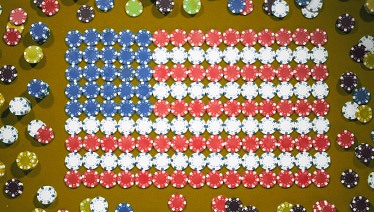 Some observers believe that the U.S. is poised to become the world’s newest online gambling capital. This follows decades in which online betting was made difficult for the Grande Vegas Casino and other online venues based on the 1961 Federal Wire Act. When the U.S. Firth Circuit Court of Appeals ruled that the Wire Act only referred to sports betting the ban continued, based on the Unlawful Internet Gambling Enforcement Act (UIGEA).

Now, the U.S. Supreme Court has struck down the Professional and Amateur Sports  Protection Act that prevented state legislatures from legislating sports betting in their state. While there’s no direct correlation between the decision that PASPA is unconstitutional and the legality of online gaming, the principle of states’ autonomy in deciding gambling laws was noted and is being used by online gaming advocates to advance online casino gaming throughout the U.S.

Today, together with online sports betting, Internet gambling is starting to come out from the shadows in the United States. Only a handful of states currently expressly allow online gambling. But experts are predicting that, very soon, online gambling will become a big industry in America. And that makes the United States a huge potential for online gaming for casino operators worldwide.

Online gambling has been legal in Nevada for almost 2 decades. The emphasis has always been on poker. Fans could make bets and collect their wins via the brick-and-mortar casinos that operate in Nevada. Online gaming was legislated in New Jersey in 2011 for players who were physically present at one of the Atlantic City casinos. That rule changed and today players can gamble from any computer – PC or mobile – that’s located anywhere in the state.

It is also legal to gamble online in Delaware and in Pennsylvania. Pennsylvania allows betting on sportsbooks and permits online gambling for slots play and for traditional casino games.

Analysts have estimated that the potential U.S. online gambling market could be as large as $125 billion. Reaching that sum depends on a number of factors such as

Observers note that the potential for online gaming has also undergone changes in the last few years. Online casino gaming is changing rapidly to meet the needs and expectations of patrons.

Some players prefer to play traditional casino or poker games while others are looking to bet on sporting events. The majority of the online casino’s customers want something more interactive. They oftentimes find it with slot machines that offer vibrant graphics and sound effects and interactive elements. Popular culture fuels the new slots – many of the new releases are based on popular television shows and movies.

Added to the potential for online betting, a number of casinos and gambling operators have initiated conversations with international entrepreneurs about the merging of competitive esports gambling. Such a move would involve multiplayer competitive games. Viewers would be able to bet on eSports games and cheer on their favorites. Many Canadian and European gaming companies believe that eSports are the wave of the future for U.S. online gambling.

The U.S. already has a game-loving population in place. Video games are more popular than ever and millennials, who have spent their entire lives playing, are open to getting more involved in eSports and eSports betting. Many companies are banking on the belief that video games could guide players into online casino entertainment. Thanks to in-app purchases, gaming has been moving towards casino-type gambling and players are more open than ever to playing for their gaming fun.

Social media is also playing a part in creating a genre of online social media gaming. Playing online for money is becoming more acceptable and more inviting. Players enjoy the social aspect of such games that allow them to keep up with their friends’ scores and compete with other players in friendly matches and companionable competition.

Gambling companies are researching ways to manage states’ gambling regulations. There are legal online casino platforms in Nevada, New Jersey and Delaware and the three states have partnered in the Multi-State Internet Gaming Agreement which allows players from both states to pool together to play on WSOP.com and 888 Poker.

New Jersey is the largest market where online gaming is offered. The state has taken in over $928 million from online gaming since it launched its online initiative in 2013. Pennsylvania signed online gambling legislation into law in October 2017 and expectations are that Pennsylvania will join the MSIGA soon to expand the multi-state player pool even further.

Online casinos have started to piggyback on sports betting and other gambling legislation. They realize that state governments are increasingly aware of the revenues that gambling can bring to state coffers and they want a piece of the pie. All parties have an interest in getting rid of offshore, unregulated sports betting platforms – from whose profits they receive nothing. Such an effort would be paralleled by a similar move to push other unregulated online gaming platforms out of the picture.

Rich Muny, president of the Poker Players Alliance, said "Today marks an important date for the future of gaming in the United States. The future of sports betting will continue to rely on internet and mobile technologies, and this is also true for all gaming. Now more than ever, states should take control of unregulated internet poker and sports betting and create systems that protect adult consumers and provide governments with new streams of revenue."

Four states that have passed online poker legislation and, to date, a few additional states are considering or making a push towards bringing online casino gaming to their state.

New York appears to be on the cusp of making such legislation a reality this year. Legislation has passed through the State Senate in  both 2016 and 2017 but each time the bills stalled in the State Assembly. Now, Senator John Bonacic a leading force in the drive to allow sports betting legislation, online casino gaming and daily fantasy sports, is retiring. The impetus for such a bill to get done by the end of the calendar year is high

In Connecticut the legislature has been holding hearings about online gambling and sports betting legislation. The legislation has support from both of the state's casino-owning native tribes – the Mohegans and the Mashantucket Pequots. However, the legislation hasn’t yet come to a vote. Governor Dannel Mallow is considering calling the General Assembly into special session to consider a bill that would allow online gambling.

The third state where legislation to allow online gaming is under review is Michigan. Bill H4926 has been introduced but the state’s gaming tribes and brick-and-mortar casinos are fighting over the bill and the legislation has stalled.

Finally, in California, an online gaming bill was introduced in 2007. There, the same issues as those being fought over in Michigan are preventing passage. Now that sports betting has entered the equation, there’s hope that the 2 bills could be packaged together.