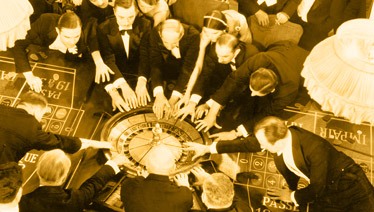 Richard Jarecki, a Vegas casino legend who caused mayham in casinos throughout the world, died this week. Jarecki is remembered in Vegas and along the French Riviera for figuring out how to predict the results of a roulette wheel's spin which earned him millions in casino wins and put the casino industry in a tailspin

Jarecki was a medical researcher who discovered that he could take advantage of flawed roulette wheels. He traveled from one casino to the next throughout the '60s and '70s, testing his theory and, in the process, winning major wins.

Jarecki was born in Germany. His family immigrated to the United States in the 1930s after the rise of Hitler caused them to flee Nazi Germany. He studied at Duke University and returned to Germany in the '50s for graduate studies at the University of Heidelberg. It was in Heidelberg that Jarecki began to win large amounts of money playing roulette.

By the early 1960s, Dr. Jarecki and his wife traveled through Europe and across the United States, for the most part, visiting casinos. His favorite casino sites were those in Monte Carlo, Divonne-les-Bains (France), the Italian Viviera casino in San Remo, casinos in Las Vegas and  inBaden-Baden, Germany. He experienced significant wins at the roulette table and other players were inspired to copy his bets. The casinos didn't know why Jarecki was so successful but what they did know was that when he entered a casino, the casino's revenues could expect to take a hit.

Jarecki stuck to the roulette table and he racked up win after win. San Remo casino’s managing director Robert Lardera said that by 1969, Jarecki was considered “a menace to every casino in Europe” and he was banned from several casinos. In Italy authorities managed to bar him from entering the country for several months.

By the late '60s Jarecki's casino winnings were estimated to exceed $1.2 million -- more than $8 million in today’s money. The question on everyone's mind was "why?" Roulette is a random game in which winning and losing is a matter of chance. Right?

In the 1950s, while studying in Germany, Jarecki came to believe that there had to be a way to predict where a tossed ball would land on the roulette wheel. To accomplish that he developed a statistical model of the roulette wheel on a computer at the University of London. His original model was meant for casino owners and employees.

However, in truth, Jarecki was actually carefully observing roulette wheels for slight imperfections. He collected data on different roulette tables and studied the information carefully. Jarecki analyzed the information that he and his friends gathered and discovered that the wheels and tables had flaws that resulted from their construction.

Learning about the flaws, including manufacturing imperfections, scratches, wear and tear, defects, unleveled gambling tables and more allowed Jarecki to exploit the flaws and win more often than was customary in a game of chance. The system that Jarecki used had actually been developed in the 19th century by Joseph Jagger, an English engineer  who used it successfully in Monte Carlo.

Jarecki was able to expand on Jagger's initial findings and take advantage of the wear and tear and mechanical defects that resulted in a bias towards certain numbers. Jarecki would observe the ball for a long time and then predict – with a high degree or accuracy – where the fall would next fall.

Over the years many gamers have tried to emulate Jaggar, Jarecki and other successful strategists. Some of the most innovative (and sometimes successful) of these techniques include the following:

Unlike some other casino games it's possible to win at blackjack via strategy. If you're looking for a blackjack variation that gives you the biggest advantage, play Spanish 21.

It's true that there are several rule differences between regular blackjack and Spanish 21. The most distinctive difference is that the Spanish 21 game is played without any 10 point cards so the deck has 48 cards instead of 52 cards (all the face cards are left in).

So on the one hand, when you remove those 10 point cards, there is less of a chance to draw a natural 21.

When you play in tournaments you pay a flat fee up front but if you win the tournament the prize value might be substantially more than your buy in fee. Even slot game tournaments can be rewarding for the first, second, and third place players.

In blackjack part of the casino’s advantage is derived from the dealer playing against several customers simultaneously. You will experience less volatility in the distribution of the cards if you are facing the dealer alone. In fact, management may  send over some house players or close other tables in order to fill up your table if you find yourself playing the dealer by yourself.

When you're at a table on your own, your chances of getting high value cards decline as more people draw from the shoe. When it’s just the dealer and you you'll have an even chance of drawing the cards you need.  The chances of that drop radically when more people join the table.

Since the dealer doesn’t need to draw high value cards as often as the individual players you enjoy an advantage.

The roulette betting table is designed to emphasize high risk bets. Players tend to think in terms of betting onlyu on single numbers for their inside bets since most of the betting options on the table are the single numbers.

Your best chance of winning in a conventional roulette strategy is to play the “safe” outside bets: red or black, odds or evens. Other bets with better-than-average wins  include 1st twelve, 2nd twelve, and 3rd twelve numbers.