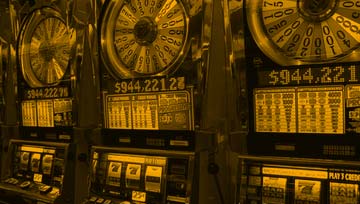 The US gambling industry is growing. Now Virginia, a traditionally anti-gambling state, is stepping into the casino gambling waters, toes first, with small slot machine gambling venues that are sprouting around the state.  Bet they won't offer a new player casino sign up bonus, like our very own Grande Vegas does - but let's see....

Virginia has never been known as a gambling-friendly state. Almost all forms of gambling were completely banned except for “charitable gambling” which was approved in 1973. A state lottery was introduced in 1987.

In 1989 Virginia began to allow pari-mutuel betting which involves bets that are pooled and then the payoff odds, minus the house take, are calculated by sharing the pool among all winning bets. Virginia’s pari-mutuel betting schemes were overseen by the Virginia Racing Commission.

In 1995, pro-gambling forces started to push for legal casino gambling. Over the years, various bills have been introduced into the Virginia legislature but they’ve never made it past the initial committee hearings.

Another proposal that gambling proponents couldn’t get off the ground involved riverboat casinos. Critics argued that the negative impact of such gambling sites would be greater than the potential for revenue gains and the idea never gained the needed support.

Introduction of Casino Gambling in Virginia

Pro-gambling organizations have finally succeeded in getting Substitute Senate Bill 1126 approved by the Virginia General Assembly.  This will strengthen the 2018 limited casino gaming bill that has already opened the way for betting establishments to operate in Virginia.

At present, the small gambling halls can only run in communities where pari-mutuel gambling is approved by the public. The Virginia House has now passed Bill S 1126 which, if the bill is approved by the House of Delegates and signed by the governor, turn the question of whether to allow full-fledged casinos to operate in Virginia to a referendum vote, probably on the 2020 ballot.

Currently, Bristol Resort & Casino is awaiting approval to build a casino in Bristol. That would be the first fully-operating full-sized casino to do business in Virginia.

After the 2018 limited casino gaming bill was approved, small gambling venues began to open throughout Virginia. Many of them are run by a slots-style gambling company called Rosie’s.  Rosie’s has opened these “mini gambling halls” in New Kent, Vinton and Richmond and a fourth site is planned for Hampton Roads.

Theoretically, under the 2018 legislation, Rosie’s could open dozens of these gambling centers throughout Virginia. Critics are concerned that the company has a major advantage over others as Virginia prepares to welcome full-size casinos. Governor Ralph Northan disagrees. “I wouldn’t say it’s a head start,” he said. "They are doing very well. We just want to make sure — as we move forward with casinos, with gambling in the commonwealth of Virginia — that we do it responsibly. As governor, that’s a priority of mine.”

Rosie’s does seem to have a heads up in getting in on the ground floor in the state’s gambling industry. In addition to Bristol Resort & Casino, which is still waiting on approval to begin construction, the Pamunkey Native American Tribe announced that, in the event that bill S 1126 passes, they have plans to build a $700 million casino-resort, probably near New Kent.

Sports betting legislation has also been introduced to the Virginia legislature as part of Bill S 1126.  If the legislation is approved by referendum, the proposed Bristol Resort and Casino would be permitted to offer sports betting in addition to poker, baccarat, roulette, craps, blackjack and slots.. Other proposed sites for large casinos, where sports betting could also take place, include New Kent, Danville and Portsmouth

A Virginia State Senate committee has amended Bill S 1126. The bill now requires that, in order for a referendum on casino development be placed before Virginia voters,  the Joint Legislative Audit and Review Commission must conduct an in-depth legislative study. The purpose of the study would be to assess the impact of such a bill on Virginia and review casino gambling laws in other states.

Since findings aren’t due until after November, the referendum won’t be able to be placed before voters until next year. The bill also prohibits the Virginia Lottery Board from issuing any licenses to casino operators that would allow them to open a gaming operation before July 2020.

Many Virginia residents live within a short drive of Washington D.C. which has legalized sports betting.  Those that wish to do so  will probably drive over to D.C. to place sports bets once sportsbooks start operating in the District.

The main opponent of legalized gambling in Virginia’s Legislature is Speaker Kirk Cox. Cox will be fighting against any move to introduce casinos or sports betting to Virginia. “I do not believe opening the commonwealth to casino gambling is in the state’s long-term best interests,” Cox said. “I will continue to strongly oppose casino gambling and will encourage my colleagues to oppose it as well.”

Gov. Ralph Northam, however, is “open to a conversation about keeping [casino] revenue in the commonwealth.”