What do the Statisticians Say About the Odds of Winning $100s at Slots? 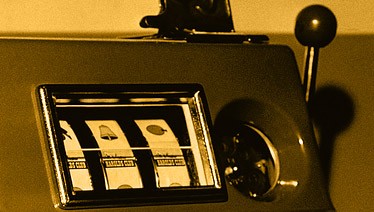 Slots are one of the most popular forms of casino entertainment worldwide. They're fun, easy to play and offer a chance to enjoy a potentially money-making activity that meets your interests, fantasies and personal gaming level.

Most people play slots simply because they're a fun distraction. Playing the slot machines don't require knowledge of gaming skill or techniques or the need for high betting levels.

So what do the experts say about your odds of actually winning at slots?

The first slot machines were developed in the late 19th century. The machines were originally called the "Liberty Bell" and they quickly became a popular attraction in salons and other venues where gamblers liked to gather. Payouts for these early slot machine wins consisted of a drink at the bar or a prize of some fruit or candy.

In that era gambling was illegal in most areas of the country but the game seemed innocuous, even to law enforcement officers and inspectors and people continued to enjoy the light-hearted reel play. When the early casinos were opened in Las Vegas in the 1940s playing slots quickly became a popular gaming option. The machines attracted high rollers and low bettors alike while appealing to everyone's love of fantasy and whimsy.

The slots underwent many  modifications and revisions over the years. One of the biggest  changes came in 1963 when Las Vegas casinos introduced an electromechanical slot machine. This machine featured a bottomless hopper so players would receive an automatic payout on a win. The bottomless hopper meant that the machines could be totally self-operating without any need for a machine attendant to stand nearby. This increased slots popularity in Las Vegas casinos for both management and players.

The next big innovation in slots play occurred in the 1980s when the microchip was introduced. Throughout the last few decades slots has grown and expanded, moving from three-reel "spin-and-win" machines to five-reel machines that feature engaging themes, alluring graphics and animations, extra elements and the ability to win real money in a short period of playing time.

What are the Odds of Winning at Slots?

As you play your slots, keep in mind that there are no winning strategies to win. They are what's known as a "negative equity game." EV games are those in which application of skill or methodology has no bearing on whether the game become profitable in the long-term. Slots games are won by pure chance (or luck).

You may be able to make money in a short-term gaming episode but this won't work on a long-term basis. So if you enjoy slots play you might prefer to participate in short spurts, rather than for long stretches.

Why? There are five symbols on each line. The object is to match five of the same symbols in order to win the jackpot. (here, we will focus on the jackpot prize, not on the smaller wins).

Basically, once in every 625 spins you'll hit the five identical symbols and achieve the jackpot prize.

Continuing on, if the jackpot payout was $625, on average you’d pay $1 624 times without winning anything  so your game would be a break-even proposition. You'd hit once in every 625 spins, win the $625 prize and break even overall. If the machine was set for a 95% pay-out (since the pay-outs, which are set by the casinos, are delivered at a slightly lower figure than 100%), the jackpot would actually be $594.

Every once in a while someone gets lucky and hits the jackpot on one of his first spins. Then he makes a profit. However, in the long-term, the law of averages isn't on your side.

One thing to remember is you'll lose more money when you're playing at an expensive machine since you’re laying out more money into the machine each hour.

Can you overcome the odds? Somewhat. First of all, you should be playing for the entertainment component, not to make sustainable returns. Think of slots play as buying a ticket for a concert – you put down money for the entertainment, not to get the money back. You can look forward to the possibility of a lucky win but don't bank on it – and certainly, don't bet any money that's not in your entertainment budget on your games since, as demonstrated, the odds aren't in your favor.

There are a lot of myths about slot machines. You can always find people who will tell you that they've discovered the strategy for beating the slots. This is patently absurd -- unless you have some kind of technology which can damage or control a slot machine directly, there's no way to beat the machine long-term.

Same for the advice that slot machines run on hot and cold cycles. Remember that the results of each spin are determined by a random number generator. These RNGs are programmed to function on individual spins. There's no “machine memory” of previous spins because every spin is an isolated event.

Can you Improve your Odds?

There are some strategies for you to improve the odds in your favor – not as part of the game itself but when you select your game. It's recommended that you choose a game that features a skill bonus round or skill component. Then you can activate your skills to improve your odds. You won't get around the house edge with such games but if you adhere to the advice on how to play these rounds you'll be able to enjoy better odds.