What is Game Exchange 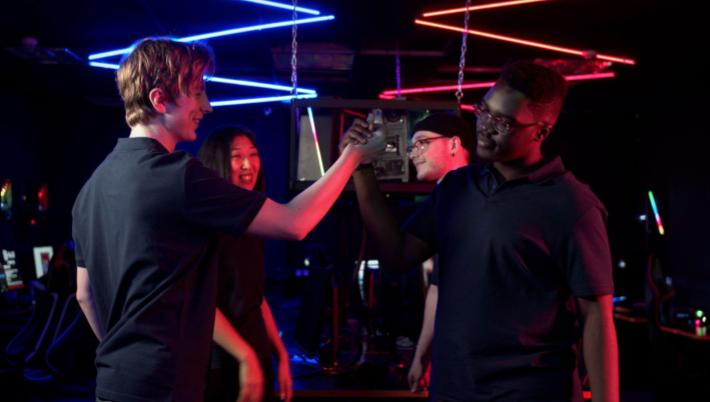 The United States State Department has a new policy of pursuing diplomacy by having young people engage in people-to-people meet-ups through a shared interest in creating video games. The initiative, which ran the course of 10 weeks during the 2021-2022 school year, brought together – virtually – 450 students from the United States, Bahrain, the United Arab Emirates and Israel in video game contests.

The program, called Game Exchange, is being closely monitored by us here at our Vegas casino online real money venue which, itself, draws in gamers from around the world who gather to compete in online casino tournaments and jackpot competitions.

This year’s Game Exchange was a pilot program which aimed to bring together students from those four nations to create and share video the games that they developed while, at the same time, fostering relationships.

A grant from the Stevens Initiative which is partially funded by the Bezos Family Foundation and receives funds from the State Department allowed the Aspen Institute to start the project which is expected to expand in Year 2.

The State Department calls Game Exchange “people to people diplomacy” and believes that the relationships that the program fosters will, in the future, impact on subjects including food security, climate change and gender equality.

Chris Miner, U.S. Department of State’s acting deputy assistant secretary for professional and cultural exchanges told the Washington Post that “This virtual exchange is just the beginning of what we hope to be a lasting relationship that moves beyond gaming.”

Participant reactions were overwhelmingly positive. Edyn Henton, 16, a student at Martin Luther King Jr. High School in Detroit told the Washington Post that she had never met anyone from outside the United States and had a hard time relating to the foreign players until an Israeli student said “s---” during one of the video conferences.

That led to a discussion of how today, students around the world can watch the same movies, play the same games and speak much of the same language thanks to the Internet.

Teacher-mentor Silas Williams became interested in working with the Game Exchange program after he saw how his own son met overseas friends during the pandemic through online video game platforms.

Williams, who learned the Scratch programming language while he was completing a master’s in 2008, feels that in addition to talking about games and meeting friends, Game Exchange promotes creativity. “For African American kids, it’s not to just consume technology, but to be creators of technology,” he said, noting that programs like Game Exchange challenge the students to avoid being only consumers of technology in favor of thinking like creators.

In fact, it was the creative aspect of the program, as much as the opportunity to showcase their creations to people across the ocean, that appealed to the students. One of Williams’ students, Timothy Parker, told the Washington Post that he sees the program as a gateway through which he can build on his existing skills  in game creation. Other students spoke about their excitement at having had the opportunity to learn about the code behind video games.

But for most of the students, the highlight of their participation involved the opportunity to connect to other young people. Tomer Malka of Ashdod came to the program with few expectations about his peers in Detroit.  “I wanted them to work together and have fun, just like me,” he said.

There were cultural gaps that emerged during the program. For instance, when Israeli students asked their Detroit counterparts about their families and what their parents do for work, the Israeli youngsters saw that a way of expressing interest in the lives of the Detroit participants while the Detroit kids were appalled. Williams explained that  “if someone they don’t know reaches out to them like that, they think it’s a scam.”

Technological difficulties also made it hard for the program to move smoothly and future organizers now know that they must consider techniques for adapting to varying needs in different countries.

For instance, some schools have weak broadband connections which causes screen freezes on video conferences as students present their games.  The chat platform for gamers, Discord, is banned in the United Arab Emirates. A number of students couldn’t download specific communication platforms on their devices.

The program will continue and is actually expected to double in size. Program facilitators are learning from past mistakes and are getting ready to make changes including preparing students for the experience of working with peers in a different country. But at the end of the day, the students said they enjoyed the social aspect of the program as much as they enjoyed presenting their work.

Henton from Detroit said, “At first it felt unreal to work with students from other countries across the world, but there’s something spectacular about getting to know new people.” And Malka in Ashdod summarized his experience.

“The program let us know how to create games, but I think, more important than that, is to create friendships with people all around the world.”