What We Know About AI and Gaming 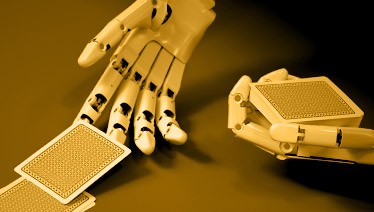 Artificial Intelligence is a natural fit for gaming designers who use the technology to design entirely new types of Vegas online games and other video adventures that stretch the bounds of human imagination.

AI isn't bound by tradition and precedent. These are distinct advantages in game design that sets the stage for new types of creativity and innovation. Best of all, designing games with AI may lower the cost of game development.

Artificial Intelligence, generally referred to as "AI" refers to the theory and development of computer systems  that have the ability to perform tasks that normally require human intelligence. These tasks involve speech recognition, visual perception, decision-making, and language translations.

Computer scientists have been talking about AI since the 1950s and funds and enthusiasm for research came and went throughout the second part of the 20th century. In the first decades of the 21st century interest and, more importantly – investments – have boomed. AI researchers have successfully applied machine learning to academia and industry based on the application of engineering skills and on the power of computers today.

One of the first games to try to harness the power of AI was Rouge, a game developed in the early '80s. This text-based adventure game created infinite game variations using a pseudo-random dungeon layout generation. Shortly thereafter, Elite, an intergalactic trading game, generated vast swaths of outer space by squeezing a multi-verse into a small game using nothing but the Fibonacci sequence.

Over the past 20 years AI games have provided more than the terrain. In Skyrim for example, a 2011 role playing game, AI algorithms generated simple, unique quests by randomly configuring a goal, places and enemies. The involvement of AI eased the workload for the game's quest designers.

In the 2016 No Man's Sky, the AI algorithms enabled a small team of developers to create a world of vast dimensions that was filled with imaginative, lifelike creatures.

Some visionaries believe that in the future, game artists may only need to sketch a design and the AI will fill in al the geologic details. Others who work with AI envision that AI will be able to dream up completely new game elements as a kind of computational creativity.

Today AI can create games that evolve from images pulled up from license-free depositories such as Google Images and Wikimedia Commons. It's able to flesh out rules, backstory and premise with ideas and characters that are lifted from social media and online newspapers. The AI writes the information in a text file and then runs it by a stand-alone application.

AI was once limited to developing platform games (think Nintendo’s Super Mario Bros.)Today, given the software’s current iteration, the repertoire has expanded to puzzle games, adventures and other genres. AI researchers also believe that in time the system will be able to learn from players' feedback so that it can improve its games.

Semiautonomous game-making systems are, in most cases today, supported by human designers. Mark Riedl, an associate professor at Georgia Tech, says “There are two types of content in video games: ‘throwaway’ content, such as terrain, common enemies, quests that don’t add to the overall plot that make very little lasting impact on the player, and ‘memorable’ content, such as boss monsters, major plot points. While the automated creation of ‘throwaway’ content has been used for decades using simple rule-based algorithms, generating ‘memorable’ content is a human-level AI problem.”

Some AI researchers say that this area could reap major rewards in unlocking new game concepts and mechanics. In one recent experiment, an AI moved past designing basic levels for an adventure game and proceeded to design levels in which a player controls multiple adventurers simultaneously, allowing some to be eliminated in order to rescue the remainder. The researcher commented that “it frequently does things like this—looking beyond the assumptions I have, and finding interesting things I would not think to look for.”

There is the possibility that AI could, in the future, prompt human designers on commercial projects. One AI facilitator said that “the AI can explore a space, identify things that are potentially interesting, and then present them to a designer to follow up on. So your level designer receives a weekly digest of 10 level ideas every week. They’re unpolished, but they present a particular idea that might be developed into something bigger.”

Riedl is presently testing ways in which automated systems blend ideas from various video games for the purpose of creating new ideas and even genres.

This technique is used by designers at professional studios – for instance, at one gaming studio, one of the design teams would label slips of paper with game concepts and then mix them up. They would then pull the slips out and use the random combinations to generate new ideas. Reidl’s system uses the same premise as it takes platform-game levels that are based on the stages of one game and blends them with other ideas to generate a whole new game.

Reidl says “one of the bigger challenges is for an AI system to figure out when it has made a good blend. The algorithm must measure the novelty of what it is generating, how surprised a player is likely to be by the creation, and some game-specific attributes such as playability and conformance to universals about good game design. Reidl also intends to explore the use of human play testers in the future.

Julian Togelius is an associate professor at New York University’s Tandon School of Engineering. He has pioneered work on evolutionary algorithms for generating game content.

Togelius believes that although automated game designers could fundamentally alter the ways big-budget games are made, collaboration is the future for human game designers. He says “for the foreseeable future, the best game generation will always be by humans in collaboration with algorithms.”