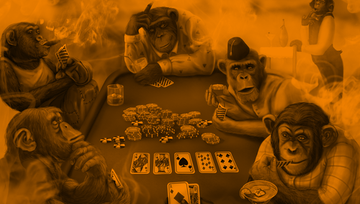 Vegas casino gambling has been a part of human behavior for thousands of years. Archaeologists and anthropologists have found artifacts from every era and in every region of the world that demonstrate that throughout history, playing games for prizes has been a part of every society. From the Pharoahs’ Senet board game in ancient Egypt to the Royal Game of Ur in Babylonia, Tafl of ancient Scandinavia and the Roman Empire’s Game of Mercenaries, man has always sought chances to vie for valuable rewards through gaming efforts.

A number of research centers have examined the question of why people are drawn to gaming. Today, gamers, casino operators, gambling addiction therapists and researchers are reviewing recent studies in which observations on other primates offer clues about why humans are drawn to gambling games.

Scientific researchers often observe the behaviors of non-human primates to provide insights on human behavior. They have determined that non-human primate behavior is similar to characters and traits of humans. This is not limited to affective behaviors but also to activities of day-to-day life as well as to conduct that occurs during special events and occurrences.

Scientists believe that, by examining humans’ evolutionary forbearers – primates – they can answer some of these questions.

We know that humans have played games with the goal of winning tangible rewards throughout history. We have ancient drawings and texts, as well as tools and implements that prove that gaming has been a feature in every era of every culture.

Researchers have long been interested in trying to determine why this is so. Why are humans seemingly genetically drawn to play games of chance? Why do intelligent, well-educated people enjoy activities that are based on random events – and often convince themselves that, by following a pattern that really doesn't exist, they can reap rewards?

In comparing human behavior to primate behavior, we start to understand our evolutionary make-up. In the future, this knowledge may be used to treat excessive gambling behavior in humans.

An early study done on monkey gambling took place at Duke University. Dr. Michael Platt, a neurobiologist, wanted to demonstrate that monkeys have the same predisposition to gamble as humans. Platt’s research, Monkeys Pay Per View: Adaptive Valuation of Social Images by Rhesus Macaques, showed that when given the choice between receiving a steady reward and taking a chance to receive a reward, monkeys will consistently choose to take the risk.

In his experiment, Platt showed male rhesus macaque monkeys two lights on a screen. They had the choice of gazing at a "safe" light, for which they received a fruit juice reward, or at a "risky" light, at which their juice reward would vary. Over and over, the monkeys showed that they preferred the risky behavior. They gazed at the "risky" light more often on a consistent basis because they  wanted to gamble.

Even when Platt varied the study and showed the monkeys that they could lose their reward by gambling it, the monkeys continued to prefer to gamble. They consistently selected the riskier option, even though they knew that they were "gambling" their prize.

Platt changed the parameters of the study by reducing the payoff for gazing at the risky light. The monkeys began to receive smaller rewards. Then he observed the monkeys to see how they would behave after they had suffered a series of losses. Throughout the study, regardless of previous losses or the value of the reward, the monkeys showed that they preferred to gamble for their rewards.

When researchers wired electrodes into the monkeys' brains, they could determine that, whenever the monkeys increased their risky behavior, the neuron activity increased. Platt wrote that "the activity of these neurons paralleled the behavior of the monkeys. They looked like they were signaling, in fact, their subjective valuation of the target…….It seemed very, very similar to the experience of people who are compulsive gamblers. While it's always dangerous to anthropomorphize, it seemed as if these monkeys got a high out of getting a big reward that obliterated any memory of all the losses that they would experience following that big reward."

Following the study at Duke, researchers at Rochester University in New York sought to answer the question of  why the monkeys behaved in this manner. Tommy Blanchard, a doctoral candidate in brain and cognitive sciences designed a study that would examine decision-making in gaming situations in non-human primates.

Blanchard teamed up with Andreas Wilke, an assistant professor of psychology at Clarkson University and Benjamin Hayden, assistant professor brain and cognitive sciences at the University of Rochester. Their research was designed to focus on the question of whether gambling is part of a primate’s cognitive make-up. They wanted to see if primates would look for, and see, patterns that don't actually exist, and if so, whether it happened because of primates' need to adapt to their environment.  Such an adaptation, the researchers  said, dated from prehistoric times, evolved over time and continues to guide us.

In their study, the researchers chose to focus on situations of random chance. Such random occurrences, they believed, were survival techniques for our predecessors and allowed the strongest and most adaptable to survive.  They designed a project that would whether monkeys will act, and if so, how, when faced with a winning streak. To do this, they created three types play paradigms -- in 2 of these types of play, the correct answer repeated while in the third type of play, the answer was random.

The monkeys saw that discerning a clear pattern to the play paradigm would earn them a reward. When faced with the random play paradigm, the monkeys made choices in a way that suggested that they were expecting a "lucky streak." They favored the random play and the riskier behavior, regardless of the fact that they could win more rewards with the less-risky behavior.  According to Blanchard, the monkeys “had lots and lots of opportunities to get over this bias, to learn and change, and yet they continued to show the same tendency.”

Gambling is a popular activity in every culture. Neither religious nor governmental warnings have ever reduced the desire of people to play games for the chance. Our genetic and cognitive make-up may predispose us to gambling but it is our responsibility to research games, casinos, operators and when and where we play to make sure that we gamble responsibly - like at Grande Vegas Casino.