Will Arizona Get Sports Betting This Year? 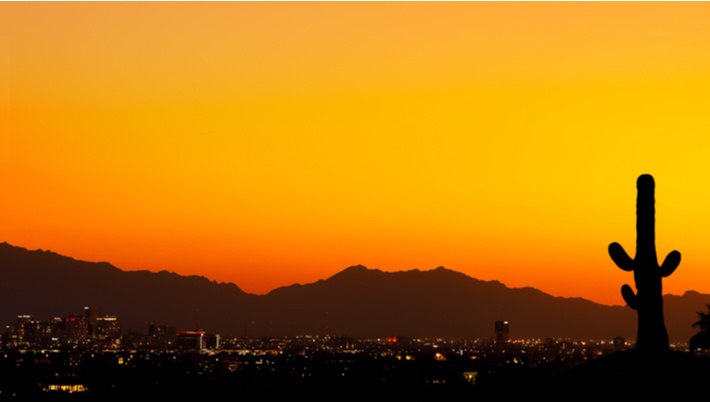 Sports betting enthusiasts in Arizona had expected that they would be able to place legal bets on the 2021-2022 NFL season this year but a lawsuit by the Yavapai-Prescott tribe may put a damper on those plans. The tribe claims that sports betting is unconstitutional because, in negotiation with gaming tribes in the state over a renewed compact, the state presented the terms as non-negotiable and rural tribes were excluded from the negotiations.

Retail and mobile sports betting is now legal in Arizona and the state is moving quickly to make access to both retail and mobile sportsbooks available throughout the state. Arizona was a surprise addition to the list of states that have legalized sports betting this year. Most observers had believed that agreement between the Governor and the state’s gaming tribes over a new compact wouldn’t be concluded before the legislature’s April adjournment date.

But an agreement was reached and plans for retail and online casino sports betting to launch in September moved forward. Now the Yavapai-Prescott tribe – one of two Arizona gaming tribes that did not sign the compact with the state earlier this year – has sued the state, claiming that rural tribes were pressured to agree to the Governor’s terms against their will.

The question over whether retail and online welcome bonus casino sports betting will continue in Arizona is now up in the air.

The Arizona compact that Governor Doug Ducey signed with most of the state’s gaming tribes allows the tribes to expand their casinos by offering new table games like craps and baccarat. In exchange, most Arizona gaming tribes agreed to support House Bill 2772 which allows off-reservation sports betting at both retail and mobile sportsbook sites.

According to the Yavapai-Prescott tribe, they were not included in the negotiations of the 2021 Amended Compact. The compact, the tribe says, was presented as a non-negotiable, 'take-it-or-leave-it' proposition and rural tribes "were excluded from meaningful negotiations."

But, says State Sen. T.J. Shope, R-Coolidge who sponsored the legislation, the law is fair and equitable." I expect any legal challenges to be quickly dismissed so that the economic opportunities already happening as the result of Tribal-State Gaming Compact Amendment can continue to materialize."

In its lawsuit, the Yavapai-Prescott tribe is asking the court to direct the Department of Gaming to stop issuing sportsbook licenses and ensure that, for now, sports betting not proceed in Arizona.

According to court filings, allowing off-reservation sports betting will “result in direct, substantial and uncertain injury to (the tribe) by eliminating exclusivity it has under its existing 2003 Compact and reducing critical revenue received from such exclusivity to provide needed tribal government programs, social programs, clean water, education and other valuable resources to ... tribal members that would not otherwise be had but for such exclusive gaming." The suit names Department of Gaming director Ted Vogt and Governor Doug Ducey.

The tribe says that the law is unconstitutional based on the  legislature’s obligation to  "enact laws that apply equally to all individuals who might benefit from the Legislature’s attempt to remedy a particular evil."  In this case, the sports-betting legislation is not equally beneficial to both sports teams and tribes.

The law, says the lawsuit, benefits the sports teams because 10 mobile sports betting licenses were created for the professional sports teams and another 10 were made available for the state's 22 tribes. That means that every pro team in Arizona gets a license but only one out of 2 tribes will receive a license.

Yet, in order to apply for a license, the suit states, all tribes had to pay the same nonrefundable $100,000 application fee. While the pro teams had almost sure guarantees of receiving a license, each tribe had less than 50% odds of winning a license. Even at that, when the Department of Gaming announced which of the tribes got licenses, it was announced that only eight non-tribal sports venues/teams received licenses, even though there were 10 available.

The lawsuit also points out that the tribes also were required to sing the compacts with the state in order to apply for a sports-betting license while sports teams were not.

In addition the tribe claims that the new Arizona gaming laws violate Proposition 202 which was approved by Arizona voters in 2002. The Voter Protection Act says that unless a voter initiative furthers the purpose of that initiative, the Legislature cannot amend it.

The lawsuit states that, "The primary purpose of Proposition 202 was to grant the exclusive right to Arizona-based Indian tribes to engage in gaming activities on Indian lands for the critical purpose of providing jobs and revenue to fund tribal government operations and programs. The purpose and/or effect of H.B. 2772, on the other hand, is to eliminate exclusivity for gaming activities expressly granted to Arizona-based Indian tribes."

Other issues raised in the lawsuit include the tribe’s claim that House Bill 2772 violates the Equal Protection Clause in Arizona’s state constitution and did not, as claimed, meet the criteria of an “emergency measure” to justify its passage. "If a statute discriminates among individuals based on a suspect class, it is also subjected to strict scrutiny and (can) be upheld only if it is necessary to promote a compelling state interest," the lawsuit reads. "H.B. 2772 on its face and in its plain language discriminates between race and origin, namely, between sports franchise owners and Indian tribes, which is a suspect class."

A non-tribe lawsuit, filed by the Phoenix Turf Paradise horsetrack, is seeking a court review of the procedures used to license mobile sportsbooks. Turf Paradise was denied a mobile sportsbook license because the state claims that the facilities doesn’t meet the definition of a sports facility or professional sport.

Turf Paradise says that it is indeed a professional sports venue. In its lawsuit Turf Paradise claims that the Department of Gaming’s decision that the track is not qualified to receive a sportsbook license is “erroneous.”

Initial hearings on both lawsuits are scheduled for early September.