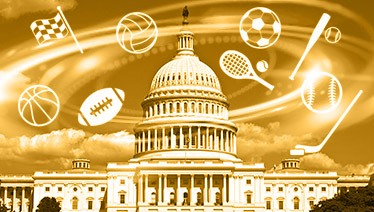 Until May 2018 sports betting, both live and at the online casino, was illegal in most of the United States, based on PASPA, the Professional and Amateur Sports Protection Act that Congress had passed in 1992. PASPA restricted betting on sporting events in the United States to only 4 states – sports lotteries in Oregon, Delaware and Montana and the sports pools in Nevada – which had sports betting activities in place before the Amendment was passed.

Within months following the Supreme Court ruling that eliminated PASPA, Congress began holding hearings to determine if and how the federal government should reassert its authority over sports betting in states which legislate and allow sportsbooks. If action is taken, it could well be that it happens this coming year.

What can we expect?

In May the Supreme Court struck down the 26-year federal ban on sports betting. Since that time seven states have legalized sports gambling in their states and more are expected to move forward on such action in 2019.

The rush to embrace sports gambling has come as something of a shock. League officials, casino operators, state lawmakers and others have been stunned to see the frenetic pace at which the gaming industry is moving forward with this new wagering option. The fantasy sports sites, which had seen their profits drop over the past few years, are suddenly back at the top of the industry with new partnerships, betting venues and online activity.

Multiple states (Delaware, New Jersey, West Virginia, New Mexico, Mississippi, Rhode Island, and Pennsylvania ) have pushed through legislation that enables sports betting in their state casinos, lotteries, racetracks and even, in some states, online. There have also been advances by established companies from mature markets, such as Australia and the U.K., which are partnering with U.S. firms with the hope of securing a slice of a pie.

Officials in major professional sports leagues in North America – the same officials who argued strongly against striking down PASPA, are now establishing relationships with casinos and sportsbooks nationwide as part of their attempt to bring money to their leagues via intellectual property rights. Analysts estimate that the sports betting market could grow as high as $10 billion in the coming years.

Presently, all eyes are on New York where a bill is set to be debated in the New York Assembly in the coming weeks as to the feasibility of legalizing sports betting in the Empire State. That legislation is viewed as a model bill for other states to emulate. The NY legislation will require gaming operators to pay royalties to professional sports leagues in exchange for the use of their intellectual property. However, prior to a league being able to collect the royalty (via reimbursement), the league must meet with a state-established regulatory commission at which time they may submit their claim. That’s when they will be required to establish proof that the royalties that they’re claiming will be spent on training programs and on various integrity monitoring initiatives.

New York assemblyman Gary Pretlow, the bill’s sponsor, is confident that Governor Andrew Cuomo will include sports betting in the 2019 state budget.

Congress seems ready to reassert federal authority over sports betting. Legislation pertaining to sports betting is being considered though it seems that, if it happens, it will come about slowly. Supporters of sports betting reform aren’t optimistic that anything will happen this year as Congress grapples with more pressing issues such as immigration reform and healthcare.

Senator Orrin Hatch of Utah, who is retiring this year, submitted a discussion draft that could provide the framework to create uniform federal standards for the legalized sports betting market. One of Hatch’s proposals includes the creation of a national sports betting clearinghouse that could become a repository for anonymized data.

Some of the issues that sports betting reform will look to confront include:

1. Player compensation from leagues’ and casinos’ commercial deals re: royalties. A number of partnerships have been established between leagues and casinos/sportsbooks. NHL commissioner Gary Bettman said that any money that the league receives from such deals will be allocated to the league’s hockey-related revenue pool. The league will share the fixed revenue from such partnerships on a 50-50 basis with the NHL Player’s Association.

Everyone is assuming that, by then, a clearer picture will emerge regarding whether the players’ union and the leagues should receive a royalty from gaming operators for the use of official league data.

Steve Fehr, a special counsel for the NHLPA said that the player’s union has not yet taken a position about whether the issue should be collectively bargained. He seemed to think that, although hockey-related revenues may surge from the league's interest in sports gambling (i.e. through higher advertising rates and increased ticket sales) and the players may negotiate to get a slice of that, the players may actually deserve even more.

Speaking at the ICE Sports Betting USA Conference in New York, Fehr said, "It's kind of hard to accept the notion that an industry should expand exponentially and generate all sorts of revenue basically on the backs of the players -- and the players should not receive anything out of that."

Fehr’s comments are supported by representatives from other players’ unions including the NFLPA, the NFLPA, and the NBAPA.

2. Betting with Credit – presently credit and other internet banking options (i.e. Paypal) are not accepted for sports books bets in land-based casino locations. This may change as pressure is placed on gaming enforcement officials as well as credit card companies. Congress may also want to look into the questions regarding using credit and online methods of payment for sports betting.

Some states are solving the issue by allowing the state lottery commission to regulate the new sportsbooks. This has already happened in West Virginia and seems likely to occur soon in DC and Kansas.

Gambling.com CEO Charles Gillespie points out that allowing a state-run lottery to regulate or operate a legal sports betting market raises issues of conflict of interest. The question is whether sports betting should be regulated by independent gaming authorities or whether they can, in fact, be regulated by the state lottery