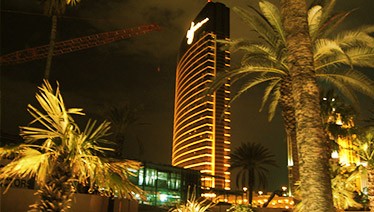 Few companies have gone through as many tumults in as short a time as has the Wynn Resorts. A massive court battle between Steve Wynn and his ex-wife was followed by allegations of sexual misconduct  against Wynn who resigned  as company CEO.

That quickly led to Wynn, a Vegas legend who set the company on a successful course that's been emulated by other Vegas casinos, to sell off his shares in the company. Wynn is now basically a non-entity in the company that he founded and built but the Wynn name is still a player.

Steve Wynn's ex-wife Elaine, who now holds a majority of the company's shares, is proposing a restructuring plan that will send the Vegas games empire into new territory.

Steve and Elaine Wynn married in 1963 and divorced in 1986. They remarried in 1991 and divorced again in 2010. In 1976 they jointly founded Mirage Resorts and led it. In 2000 they left Mirage and co-founded Wynn Resorts. The divorce was accompanied by a massive battle over Wynn Resorts stocks which had been tied to a shareholding agreement.

The battle was still raging when in late 2017 Wynn was accused by multiple women of sexual misconduct. The allegations, which Wynn claimed were instigated by his ex-wife, proved to be overwhelming and Wynn stepped down as Wynn Resorts CEO. He was, however, still a majority shareholder but that ended when the District Court of Clark County, Nevada, ordered the termination of the shareholding agreement between Wynn and the former Mrs. Wynn.

Within weeks Steve Wynn sold his shares. Up until that time he had been the major shareholder in the company, holding nearly 12% of Wynn Resorts shares. Elaine Wynn held a 9.4% stake. Now that Wynn's share have been sold, Elaine Wynn is the majority stockholder and she's proposing that the Wynn Resorts Ltd. board of directors be restructured as part of an overall plan to restore the company's reputation.

Letter to the Board

Elaine Wynn's letter to the Board of Wynn Resorts Ltd was part of a Securities and Exchange Commission filing. She sent the letter only one day after she and her husband settled the court claims in a breach-of-contract civil lawsuit that paved the way for Wynn to sell his shares.

Elaine Wynn's letter requests that the board reopen the window during which shareholders can propose business at the upcoming annual meeting. This will include nominating directors. Elaine Wynn herself said that she does not intend to seek a board position.

According to the original rules, the cutoff for scheduling meeting business and proposing nominations was January 21st 2018. To date the annual meeting hasn't been scheduled but the company usually holds the meeting in May. Wynn Resorts officials had no immediate comment on the letter.

In her letter Elain Wynn wrote “I believe that the company’s governance structure needs to be reformed and that the board of directors needs to be reconstituted. This should be done immediately and certainly before any material decisions are made that could affect the long-term interests of the shareholders.” Elaine Wynn is suggesting a 60-day reopening of the nomination process “to allow a fully vetted nomination process to occur.” She has indicated that she wants to nominate candidates that are independent of the company, of Steve Wynn and of herself.

Elaine Wynn's letter continued by saying “The nominees would be highly respected and, in most cases, have significant public company experience. They would have the requisite expertise and experience to help the company address both its opportunities and challenges. The nominees would help the board conform to current best practices with respect to diversity and would be selected with a view to applicable licensing requirements.” A board response by April 24th at 2:00p.m.was requested.

The letter explained Elaine Wynn's rationale for her request. “I raise this because of various market rumors and the Bloomberg headline of April 13 reading "Wynn Resorts CEO Maddox Says Boston Casino Sale Possible.’” Ms. Wynn has indicated that she wants a reconstituted board in place before any decisions about transactions — including decisions about a possible sale of Wynn Boston Harbor — are considered.

The April 13th article to which Ms. Wynn referred to a possible sale of Wynn Resort's Boston project which it is in the midst of building. The project is valued at $2.5 billion, meaning that it would need a big player to take it over. MGM has indicated interest but since Massachusetts limits casino ownership to one casino per company, it would have to divest itself of its current Springfield casino project.

Wynn CEO Matt Maddox said that the company is mostly interested in finding a way to "maximize the value of our assets and mitigate risk.” Wynn Resorts LTD is presently under investigation due to the allegations about Steve Wynn's misconduct. If regulators find that Wynn Resorts is unsuitable to hold a gaming license in the state it might find the repercussions rippling down to Macau and Nevada where its major holdings are located. That in turn could influence Japanese regulators regarding a license to open a casino in Japan, which Wynn wants.