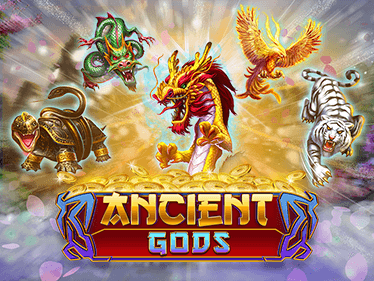 Ancient Gods is not the first Chinese-themed slot that’s coming from the RTG creative kitchen but it is surely unique, focusing on the myth of the Four Heavenly Animals of Feng Shui. In Ancient China, there were four entities that were the centre of the mystic system of astrology and geomancy. The Heavenly Emperor divided the sky into the northern, southern, eastern, and western quadrants.  Each of the quadrants had 7 star houses or constellations and each was ruled by a divine beast. There was also a fifth divine best, which represented the element of Earth and it was referred to as the Yellow Dragon of the Centre. This creature is depicted in the Ancient Gods slot - what is more, it works as the Wild symbol. The other divine beasts are, even now in modern culture, seen as watchers of the four core directions and are incorporated into the Feng Shui tradition. Amazing characters and brilliant design is what makes Ancient Gods a slot to behold. Not to mention a great max payout of 7,500 x the bet per line. You can meet the ancient gods and make a profit no sooner than July 4th on Grande Vegas Casino.

With Real Time Gaming there’s no changing of what is good, so once again we have a video slot with 5 reels and 3 rows of symbols. The number of win lines is maxed at 25, but they are adjustable and cautious players can tone it down with less active paylines if they like to play it safe. The whole scene is set in heavenly surroundings with trees, waterfalls and wonderful colours across the screen; such a sight can remind you of one thing and one thing only - paradise! The symbols include the four mentioned beasts and the Yellow Dragon of the Centre which is Wild. The Scatter, however, is a beautiful Golden Medallion with jade stones and that’s one icon you ought to pay special attention to.

The Scatter pays in any position and Scatter payouts are added to regular line wins. Furthermore, with at least three of the Golden Medallions anywhere on the reels the special Free Games round gets triggered. For every triggering symbol involved the player gets 2 free plays and the round can be retriggered. If you manage to land four or five Scatters and trigger free plays like that, your wins will be multiplied 2 or 3 times, respectively.

There are no progressive jackpot prizes to be won in Ancient Gods slot by RTG, but the max payout goes as high as 7,500 times the bet per line. Make one of the divine beasts grow fond of you and you’ll bag great payouts. Also, you’ll learn about an exciting piece of Ancient Chinese mythology, and you can do it before anyone else at Grande Vegas Casino as the game premieres on July 4th.