Asgard: Home World of the Gods 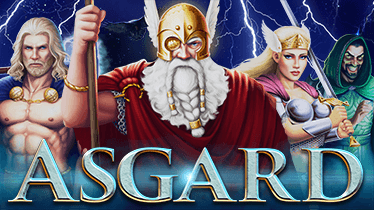 It’s epic. It’s larger than life. It’s stunning. It’s one of the best video slots themed on Norse mythology you’ve ever had the chance to spin the reels of. It’s Asgard. Developed by the visionary RTG team, Asgard has picked up all the best features RTG has to offer – brilliant design, intuitive animations and clever bonus features. An all-ways-pays game, Asgard awards you with divine winnings across 5x3 reel grid, offering 243 ways to thunderbolt-boost your balance.

Don’t get scared when you hear the thunder – that when all the magic happens! As stormy clouds make way for the mighty god titans to show their powers, you’ll see your balance getting bigger and bigger thanks to terrific features including the Golden Wild, Thunderbolt, and Free Games. The Golden Wild will replace standard game symbols, complete winning combos and double the payout, whereas the Scatter BONUS symbol will payout wins multiplied by total bet. Want to see more Wilds on screen? No problem, keep spinning until the Thunderbolt feature triggers randomly and covers up to 5 reels in Golden Wilds!

The essence of the game lies in the Free Games feature. Trigger it with three or more Scatter BONUS symbols and you’ll get the opportunity to select one of the four options, ruled by one of the four deities. The Goddess feature awards you with 15 free games and tripled wins. Loki’s Magic gets you 20 spins free of charge and adds another Wild into the game on reel 3. During Thor’s Thunder God feature you’ll play 25 free games and have your wins multiplied 2 or 3 times. The most powerful feature, unlocked after 15th trigger of the Free Games Bonus is the Valhalla Feature in which you get awarded by Odin with 30 free plays and morphing symbols – symbols that morph into other icons after the won amount is paid out, possibly awarding new wins. Feature by feature and you’ll be well-received in Valhalla!

Come December 13th and Asgard will be available at Grande Vegas for all our members to enjoy, but we’re glad to report that Real Time Gaming has whispered in our ear that two more releases are in the works – Asian-themed Fu Chi and Shanghai Lights slots will take you to another world of tradition and exotic luxury. For now, we get to take pleasure in all the delights of Asgard and spend some time with Thor, who, as we all know, is battling the Hulk in the newest MCU movie Thor: Ragnarok. What better time than now to spin the reels of Asgard and acquire some of the godly power for yourself!