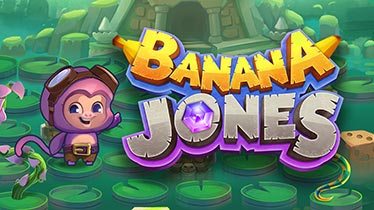 If it were a movie, Banana Jones would probably be called ‘Banana Jones and the Curse of the Crystal Banana’. Catchy, right? For now, we have an excellent, super-fun gambling game made by Real Time Gaming in a Snakes & Ladders board game style. The backbone of the game is the story: Banana Jones is a brave adventurer on a quest to save the magical, one-of-a-kind Crystal Banana. Save it from whom? The evil Leopold the Leopard and his army of snakes, that’s who! While the evil Leopold is devising a plan to seize the Crystal Banana, Banana Jones is on his way to find it first, but he needs your help. With a skilled dice roller for a navigator, Banana Jones will surely reach the Temple and retrieve the Magical Banana.

Two dice are used in the game with outcomes ranging from 2 to 12. The player gets 5 rolls of the dice per bet, and Banana Jones will move through the rainforest according to the outcomes. When he lands on the head of the snake, he will move down to the tail of the snake. But if it lands on the base of a vine, it will move up to the top of the vine. Along the way, Banana Jones will collect diamond symbols, and track all the vines and snakes it has come across. When the counter of the said symbols is filled, corresponding payouts will be credited to the player’s balance.

Online slots made by RTG are state-of-the-art products, as Grande Vegas customers very well know. Nevertheless, it is refreshing to switch things around a bit and introduce an alternative gaming item capable enough to provide payouts and endless hours of fun, RTG’s newest take on that concept, Banana Jones, is an entertainment powerhouse with a max payout worth 2,565 times the bet. You can meet Banana Jones and share a banana with him as soon as on August 1st 2018 at Grande Vegas Casino.