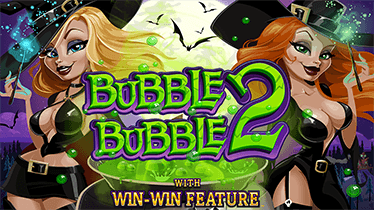 That's right, the long-awaited sequel to Bubble Bubble is on its way to Grande Vegas! It's scheduled to arrive on 11th October, and you may want to use the time in between to remind yourself of the mega-popular original. If you befriend Winni the witch she might introduce you to her cheeky sister and allow you to benefit from their combined powers. Three available features will all let you spin for free, one also populating the reels with Wild Ghosts, the other playing with up to two Wild reels,  and the third casting a spell to turn reels Wild and provide as many as 33 additional free games. Win-Win add-on has been included to make sure you never leave empty-handed or unhappy with the size of the prize. Features named Greater, Wilder and Ultra indicate what we're about to experience is even better than the much-loved original. Show up at Grande Vegas on 11th October and check if it's true!

So, what have we lost and what have we gained? In fact, Bubble Bubble 2 has kept all of the goodies offered by the original while adding a few little extras. The set-up is the same:  you'll be spinning 5 reels and creating winning combos over 50 fixed paylines, with some familiar symbols such as the black cat and book of spells, and a few new ones. At first it may seem you're seeing double, but it won't be the case: cheeky Wanda has joined her sister Winni to land her a helping hand and create an even more magical gaming experience. Instead of one Wild witch stretching over the entire reel and tripling the award, you'll get two doing the same act. Bonus? If Winni and Wanda show up in the same winning combination, they'll multiply the win by as much as x9.

There are once again the usual Scatters activating bonus rounds once you get 3 or more to line up from left to right. Which of the 3 features you'll get to play is revealed by touching one of the triggering Wands. Bewitched feature becomes Ultra Bewitched, giving you 7 spins on the house with at least one expanded Wild. Winni will either cover reel 1, or Wanda reel 5, or both of them occupy their respective reels simultaneously for some truly magical wins. Greater Ghosts feature is the familiar affair awarding 20 free games with up to 9 Wild Ghosts flying onto the reels after any scatter win gets paid. Finally, Wild Witches feature goes even Wilder with 9 free spins and both of the witches appearing to cast a spell and turn a reel into the same sort of Wild. Since now there are two, you could potentially see both at once and benefit from Wild middle reel, 33 additional free games, or cash in hefty amounts by getting both at the same time.

RTG's unique Win-Win feature has once again been included. It will award a bonus should the win generated during the Wilder Witches feature be equal to 10x the triggering bet or less, adding between 5 to 100 times your bet to the bottom line.

Dare to face two witches at once? Then mark the launch date in your calendars and come play with the charming sisters at Grande Vegas. We can't guarantee you won't fall under their spell, but can promise you'll have great time and potentially boost your balance by up to 9,000x your line bet. Wouldn't that be wicked?