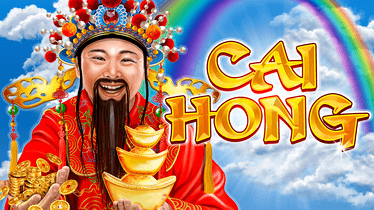 Everybody knows there is a pot of gold hidden at the end of a rainbow, the only issue is no one has as yet managed to find it. And if they did, there would still be an evasive little leprechaun to reckon with. Not when you do the hunting with RTG, though! We've got a new Realtime Gaming video slot on the way, offering players to lead them to this magical location and reward their efforts with a pot holding gold worth 50,000x their line bet. Doubling Wilds will help fuel the bottom line until one manages to launch the bonus round and win as much as 33 free spins with a multiplier of up to x15. If this sounds like a journey worth taking, show up at Grande Vegas on 21st March and give Cai Hong a spin or two.

First of all, let us explain that Cai Hong is a Chinese word for a rainbow, a motif which you'll see adorn the backdrop and attached to highly lucrative special feature. During the base game payouts will be delivered over 5 reels and 50 paylines by matching animal icons such as roosters, rabbits and oxen, each with a symbolic meaning according to the Chinese culture. God of Wealth will show up to help form winning combos, and each time it does, the resulting payout will be doubled.

Scattered Rainbow is the only game symbol Wild can't replace, and you'll need to land at least 3 of them in order to launch the bonus round. Once you do, you'll immediately receive 8 free games with all respective wins doubled. But wait, there's more! You'll also be offered Bonus Picks allowing you to win additional spins on the house and higher multipliers. Activate the feature with the help of 3 Rainbow icons and you'll get 2 picks; launching it with 4 Scatters awards 3 picks, and doing it with 5 delivers 4 picking opportunities. The maximum one can hope for is a generous amount of 33 free spins and a multiplier as high as x15. Furthermore, landing yet another triggering combination will add 15 free games to those which you've already claimed.

Cai Hong does not feature a progressive jackpot we're used to seeing in RTG slots, but it doesn't really need it. The bonus round itself has a high win potential and could boost your balance by as much as 50,000x your line bet.

Once Cai Hong arrives to Grande Vegas, it will immediately become available in both desktop and mobile version. What it means is you'll never have to abandon your search for the pot of gold, as long as there's an iPhone or an Android smartphone in your pocket. Use your preferred device to pay us a visit on 21st March and be among the first to launch a highly rewarding search for gold hidden at the end of the rainbow.