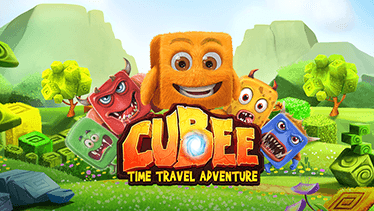 While some are calling it “the strangest RTG game ever”, here at Grande Vegas we can’t wait to have it on display! The game is set for release on February 13th and until that day comes we can only imagine what this new exciting game will bring us. Well, it’s not all so secretive actually – we know some things about Cubee and we’ll share them with you. For one, it is known that Cubee will feature a Cudlee creature called, of course, Cubee. Our hero will be able to travel through time, eat energy balls and beat several enemies. Judging by the published images, the graphics are insanely good, arguably the best any RTG product has showcased recently. Cubee is furry and lovable, but also brave and ready or an adventure of a lifetime, or multiple lifetimes.

As you load the game, Cubee will show you the adventure map where you can see the destinations you must check to ultimately reach Cubeeland. The game changes setting and the only two things that remain on screen are the adorable Cubee and the time vortex in the centre. A spin in this game is different than a spin in a regular online slot. When you hit Play there will be no reels to turn. Instead, the time vortex will start to spin and eight symbols/items will float out of it. As Cubee collects different items he manages to build energy levels and ultimately travel to various ages.

The symbols include enemies, power balls and different types of weapons (clubs, spades, axes). Power balls serve to improve Cubee’s strength, whereas weapons reduce the health of Cubee’s arch-enemy Rocco. The more enemies Cubee defeats per spin the higher the payouts. Rocco must be defeated in order for Cubee to make a transition to the next era.

A New Take on Internet Slots

Cubee is designed to appeal to players who are tired of the same old, same old in slots gameplay. It is a high-volatility game of chance with immersive graphics and a creative backstory. Did we mention the 50,000 times the bet maximum win per spin? Get ready for an adventure through time that pays well and tickles your imagination, all that at Grande Vegas Casino on February 13th.