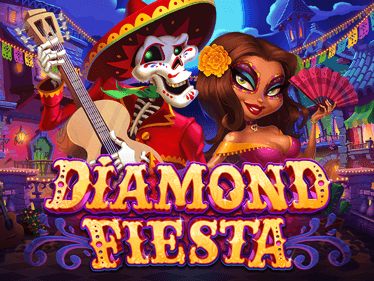 They say diamonds are the girl's best friend but we're sure guys would be equally excited to collect those featured in RTG's colorful new video slot. Though they can’t be used to create ostentatious rings everybody would envy you for, these virtual gems can expand the reels and award generous prizes as well as four jackpots. Joining the party also provides access to a free games bonus round and gives you a chance to walk away with extra 800x the bet in your pocket.

Lovely ladies dressed for the celebration are clearly ready to dance the night away to the sound of the traditional Mexican folk music, undisturbed by the fact musicians are in fact skeletons wearing mariachi outfits. Explosion of colors and a cheerful tune might make you feel like celebrating even before you start spinning 5 reels and winning across 50 fixed paylines. All symbols pay from left to right with the exception of two Scatters willing to boost your balance regardless of their positions. These two are also the only icons Wild Senor Skeleton can't substitute for.

Landing at least 6 Diamonds activates the Jackpot Diamond feature which awards 3 re-spins with the triggering symbols held in place. Diamonds are the only active icons during the bonus round and each new one will stick to the reels until the feature ends. If a Diamond lands in a corner position, it will reset the number of re-spins to 3; unless you're playing on an 8x4 grid.
Reels expand by getting Diamonds in all corner positions, progressing from a 5x3 grid to a 6x3 grid with an additional column on the right-hand side. Fill the four corner positions of the enlarged grid with sparkling gems and a new row will appear at the bottom to create a 6x4 grid. Do the same once again and two more columns will appear on the left and the right, giving you the final 8x4 set-up to play with. Any Diamond which lands in a corner position ads 1 re-spin on the expanded reel area.

Once the last re-spin plays out, each Diamond reveals a coin prize or a jackpot. Mini and Minor jackpots are up for grabs no matter the size of the grid but Major and Grand jackpots can only appear in corner positions of the largest one. The value of the prizes generally ranges between 1x and 50x the bet while corner positions in the 8x4 grid can pay 3x-250x the stake.

Landing at least 3 Scattered Skulls triggers the Free Spins bonus round. You'll win 6 free games to start with and extra Skulls, Wild Senor Skeletons and Diamonds added to the reels. Should 3+ Scatters appear once again, your free games count will increase by 3, and if particularly lucky, you'll also trigger the Jackpot Diamond feature. There's up to 800 times bet per line to be won at this exciting event so make sure to show up on 22 April which is when Diamond Fiesta arrives to Grande Vegas. As always, players can access the game via device of their choice and opt for a download version or play online via their web browsers.