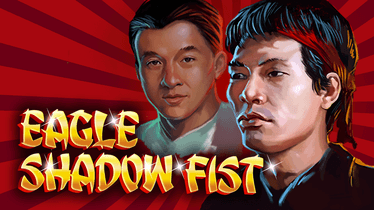 First in theatres in 1973, the kung fu flick involving a rising star Jackie Chan Ding tian li di has been referred to as Not Scared to Die/Fist of Anger/Eagle Shadow Fist in the English-speaking markets. Realtime Gaming entitled its upcoming blood-boiling slot inspired by the movie Eagle Shadow Fist, and have no doubt about it – it does the film justice. Although a routine 1970s kung fu show all wrapped up in war drama, Eagle Shadow Fist has had lots of memorable moments.

Fans of the movie can try out the new game at Grande Vegas as soon as joins the portfolio for an instant remainder of those tense fight scenes and dramatic events. The game is played on a standard 5x3 reels set, which houses character symbols and playing card icons. Keep your eyes open for the Punching Wild and the Scatter/Free Games symbol and embark on a hardcore martial arts adventure led by Hong Kong’s best known film star.

Feel the Boom in Martial Arts Cinema and Your Casino Balance

You get to adjust the number of paying lines as you please, but the max amount of active lines is 25. Spin the reels and every time you play is a new opportunity to hit the random jackpot which, announced to be tied to several other Jackie Chan-themed slots, can reach considerable amount of cash. The starting point for the jackpot determined by the game is $5,000.00 (or an equivalent amount in other accepted currencies), and it will work its way up until a lucky winner takes it home.

Jackpot aside, Eagle Shadow Fist offers multiple ways to boost your bankroll. The Wild symbol not only replaces other regular icons, but also awards the player with a double payout when being a part of winning combo. Scatter symbols also pay for landing anywhere on the reels, and three of them will trigger the main feature – a Free Games round. In it, you get 20 free spins with a x2, x3 or a x4 multiplier depending on how many Scatters triggered the round.

Multiplied free spins wins will also remain in play if you manage to re-trigger the Free Games with another three Scatters anywhere in sight. You can enjoy all the action of Eagle Shadow Fist on your desktop and mobile devices, anytime of day or night at Grange Vegas Casino. We won’t make you wait a second – as soon as RTG launched the slot you’ll be able to play it in our slots section. Warm up for a suspenseful spinning session mentored by none other than Jackie ‘Kung Fu Master’ Chan and if you show enough skill Grande Vegas and Eagle Shadow Fist will award you with a top payout of 40,000 times your bet per line.