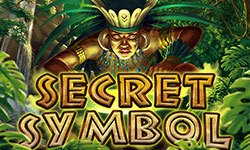 Ancient civilisations are still somewhat a mystery, with many known facts probably being just a small part of what their cultures were really about. They might each have been in possession of potent secrets, offering unimaginable powers to those in the know. We might never get a chance to uncover any of them in our physical environment, but Realtime Gaming is giving us an opportunity to do so online. Their new Secret Symbol video slot invites us to enter the Aztec world and discover the secret to wealth. Who among us can say no to such a proposition?

The sound of Aztec drums creates a dramatic audio background to this 5-reel and 25-payline game. Spinning in the midst of a mystical rainforest, reels deliver thematic symbols such as snakes and parrots, Aztec jewellery, idols  and drums. Aztec Chief and the Pyramid are two icons you’ll enjoy seeing the most, the first being Wild icon and the other acting as Scatter. While it can’t substitute for the Scattered Pyramid, Aztec Chief will gladly take the place of any of the other game icons to help you win. He also has the power to stretch and cover the entire reel during the Free Games round. Pyramid is the one who’ll get free spins activated, provided you land three of them anywhere on the reels.

Your initial 10 Free Games could double, as the feature is re-triggerable, but there’s more to it than simply benefiting from multiple spins on just one bet. Not only will Aztec Chief expand when he lands on reels 2 and 4, but this is also where the Secret Symbol comes into play. A Secret Symbol Multiplier will appear above the reels after each of your spins, multiplying your win by x2 up to a massive x20. On top, the game features 2 randomly awarded progressive jackpots, a Mini and Major jackpot, which will never go below the limit of $250 and $1,000 respectively.

Offering numerous opportunities to win big, this is one game you shouldn’t miss. In fact, wouldn’t you like to be among the first to try it out? If so, pay us a visit on March 15th and give it a go. Aztec Chief will be waiting in Grande Vegas to share his secret and his treasures with you.