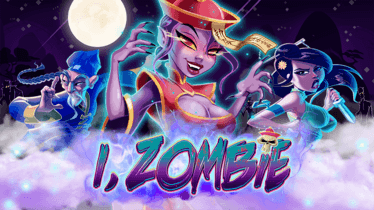 I, Zombie slot game has 5 reels and offers 25 ways to win while giving the players the possibility of reducing the number of active lines as they spin. All symbols pay left to right once they form a winning combo, except for the Scatter which pays in any position. Mirror symbols are Scatters, so they will be the ones responsible for the majority of your big wins. I, Zombie also features a Wild, which is, fittingly, the I, Zombie symbol. The substitute rules for the I, Zombie icon are a bit different from the usual role of a replacement symbol. When the I, Zombie symbol appears, it will replace all other icons, but not the Scatter. Also, the Wild will randomly generate more Wilds, and the mirror symbol has the same ability. Up to 2 additional Wilds could appear and occupy 2 more positions on the given reel.

With three mirrors minimum appearing anywhere on the reels, the player will initiate the Free Games feature. For every mirror Scatter and I, Zombie Wild on the triggering spin, the player will receive 2 free plays. If three Scatters activate the feature the award is 6 freebies. During the Free Games round, each mirror and I, Zombie will reveal more Wilds and increase win values. In situations when 4 Scatters activate Free Games, all prizes will be doubled. If 5 Scatters trigger free spins, then all wins will be tripled!

I, Zombie is an RTG slot without a jackpot reward, but its top payout is worth 7,500 times the bet per active line. Would you consider joining the ranks of the living dead for a chance to earn this handsome reward? Have a taste of the zombie life by playing I, Zombie at Grande Vegas on October 10th and then whenever you like at your favourite RTG casino!