The Rumble Continues with Lucha Libre 2 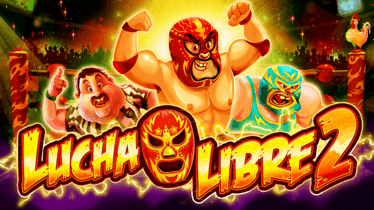 Remember the 2006 flick Nacho Libre? Starring Jack Black as the Mexican monk who moonlights as a luchador, the movie revived the genre of sports comedy. Few people know that it was inspired by Fray Tormenta, a real-life Catholic priest who posed as a masked wrestler and competed for over two decades in order to make money for his orphanage. Isn’t that quite a story and quite a theme for an action-packed video slot? You bet it is! Real Time Gaming has done it again; they’ve made a terrific slot machine sequel and you’ll be able to experience it come April 18th when Lucha Libre 2 will be available for real money play at your favourite RTG casino - Grande Vegas!

Lucha Libre 2 has retained the best aspects of the original game and added some sweet adrenaline-pimping features. It is also a 5x3 machine, standard layout, and the symbols include typical Mexican food items and items related to the wrestling match. You can see images of excited audience members, tequila shots, hot sauce bottles, and green hot peppers on the reels. The two luchadores act like Wild cards and substitute for regular symbols except for the Mucho Mayhem Scatter. There is also a Fist Scatter which gains huge relevance in one of the bonus features.

As the match starts to unfold, the player experiences lucrative features like Wild payouts with multipliers and jumping Wilds. The prize may be multiplied up to 10 times if the Wild forms part of the winning combo. There are 30 win lines in the game and payouts are acknowledged from left to right. Three or more Mucho Mayhem Scatter symbols trigger the Time to Rumble feature during which the player choses a hilarious new finishing move such as El Loco Low Blow and earns free spins with extra perks.

During free plays Fist Scatters are added to the reels 1 and 2; combine them with wrestler symbols on reel 3 and you’ll launch the Fist of Fury spin. The Fist of Fury feature may occur randomly and introduce multipliers and held Scatter-filled reels with more re-spins.

Obviously, Lucha Libre 2 is a must-play video slot; starting with April 18th all interested punters can refresh their knowledge of acrobatic wrestling at Grande Vegas Casino. The game will be launched on both desktop and mobile platforms, offering a 50,000 times bet per line top payout. Soon, Real Time Gaming will release two more Asian-themed games, San Guo Zheng Ba and Tian Di Yuan Su. Until then, get into the ring with Taco Malo and take Nacho Friend to the cleaners!