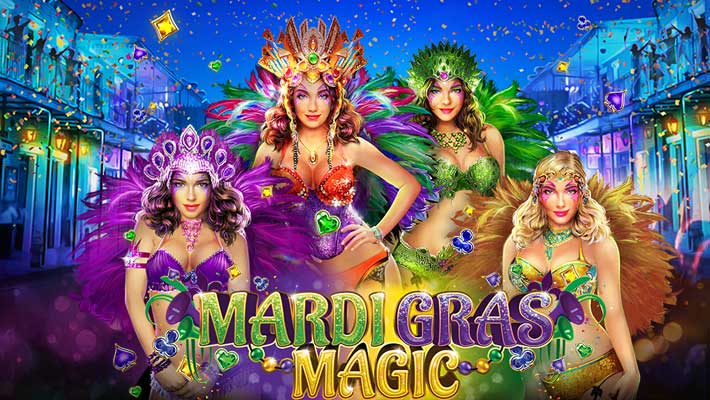 Over the last few hundred years, Mardi Gras hasn’t lost its very unique and special gleam. Is there anything quite like having a massive party while trying to earn your purple beads? Nope, we don’t think so. Mardi Gras was released just shy of Mardi Gras in 2020. That’s a brave time, so you know the game is going to be quite special.

The game is saturated in colors of purple, gold and green. Each apparently carries its own meaning; purple means faith, gold refers to power and green is related to justice. That isn’t the end of design for this game though, there are plenty of homages to the South and New Orleans including the Mardi Gras itself. You'll hear “laissez les bon temps rouler” while playing the game. Translated from Cajun French it means "let the good times roll". That’s an idea we can get behind! Mardi Gras by SpinLogic is here! Believe it or not, gambling and related celebrations have been a pretty set part of New Orleans since 1837… that’s a pretty epic 183 years… definitely something to get at least little excited about.

Open the game and you’ll be greeted by a bevy of bikini-clad women. It’s colourful, it’s fun and in the background, you might just spot a sliver of Bourbon Street… isn’t that why we are here?
While playing Mardi Gras, you can actually win up to 20,000 times your bet. That’s quite a chunk of change and very much in your interest to keep your eye on. If you want to claim any Free Spins, then you’ll need to find the scatters in the game; find 3, 4 or 5 scatters for 10, 15 or 20 Free Games respectively. Wilds in the game can pop up at any time, even during your Free Spin round. The Wild in the game is the Joker Mask, it may seem bizarre, but this wacky symbol might just offer you something you didn’t expect. Find it and it will help you make your set and lead to huge rewards.

Let’s face it, Mardi Gras is meant to be a party. And you can’t have a party without a bit of a bang! This chilled game actually allows you the opportunity to win up to 20,000 times your bet. Just imagine how many beads that could buy! You can also embrace the gift of a Random Prize Award… where a multiplier will be added to each bet line allowing you to win an epic instant prize. Still not enough? Get lucky and you might activate a Bursting Wild. It can appear on any reel and will replace most symbols. The real bonus? Enter the Free Spin round and these will pop up even more.

Historians might believe that Mardi Gras arrived in our new world in 1699, but that’s not to say it didn’t exist in the world before then. That being said, we are pretty sure it joined our realm of knowledge in 1718. Popping up in New Orleans via the first days of festivities. Whatever the story, we hope Mardi Gras is here to stay!