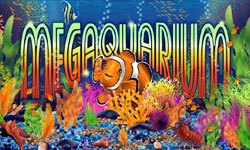 Realtime Gaming is scheduled to launch another exciting video slot, this time tempting us with treasures hidden deep under the ocean’s surface. Megaquarium slot is a marine-themed game featuring 5 reels and 50 flexible paylines. Among the various underwater creatures you’ll get to play with, watch out for Wild Clown Fish. On top of doing its usual job of standing in for other game symbols, Clown Fish will also generously double your wins each time it participates in a winning combination.

As colourful fish, friendly looking crabs and lovely corals populate the reels, you’ll be fishing for two Free Games signs which launch the real fun. It will start off with 7 free spins during which all your wins get doubled. What you’ll want to see on your last free spin are Bonus Game symbols, which extend the feature by additional 3 Free Games. Clown Fish will provide a nice surprise as it takes over the entire reel 5, and a random prize of 2 to 100 times your bet will get awarded on top. If on the last round of the Bonus Game you manage to land Super Game symbols, another feature extension is granted. Extra 3 spins come with a multiplier which increases to x5, and a prize of 3 to 200 times your bet is awarded after each Super Game.

Want more free spins? They’ll be yours provided you land 3 Mega Game icons on the last spin within the Super Game. And not only that! At the same time, reels 4 and 5 will be populated entirely by Clown Fish Wilds, and imagine the valuable combos this can help form! Each Extra Game symbol will deliver additional free spin and you’ll collect a random prize of up to 500 times the bet after each Mega Game.

Cascading bonus rounds will likely make you dizzy, especially if you keep collecting additional free spins and 3-digit multipliers. Remember to breath and keep cool, as at any moment during your game another exciting win may be awarded. Megaquarium comes with not one but two Progressive Jackpots which could be yours at the conclusion of any of the games. Major and Minor jackpots start at $1,000 and $250 respectively and are both triggered at random. To temp you further, RTG states that playing their new slot could win you as much as 50,000 times your line bet.

Sounds great, doesn’t it? You’ll have a chance to experience the thrill as of 15th February, which is when Megaquarium will launch at Grande Vegas. Make sure you show up and take a dive into what could be the most rewarding swim you’ve ever taken.