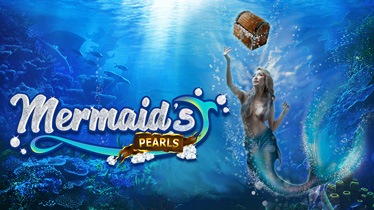 Everybody knows mermaids only existing in fairytales and legends; or do they? You may be surprised to learn that, though mermaid stories stem back to the ancient Assyria, sightings are still being reported to this date. One or more were allegedly spotted by locals and tourists at Kiryat Yam in Israel in 2009, and residents of Zimbabwe have been living in fear of two (not so friendly) mermaids, a male and a female, since 2016.


Just like the benevolent creature featured in the famous children’s book "The Little Mermaid" by Hans Christian Andersen, RTG’s Sprite has an upper body of a beautiful woman with a head full of lustrous hair and swims with the help of a fish tail. Unlike the heroine of Andersen’s story, the mermaid created by Realtime Gaming won’t fall in love with you, but she does have the power to make the developer’s new video slot pay fortunes. If you’re up for a potentially lucrative dive, visit Grande Vegas on 22 May and go hunting for Mermaid’s Pearls.

Fans of online slots have likely embarked on more than a few underwater adventures already, but none like this one. Mermaid’s Pearls is one of the rare titles playing without a substitute icon and free of a typical Scatter symbol. The game instead features a Pearl icon which pays when 15+ appear simultaneously and each appearance is recorded by the Pearl Meter.

You will have to collect 300 Pearls to launch the Shipwreck Bonus Pick Feature and 600 to trigger the Treasure Pearl Feature. It may feel like a daunting task but needn’t take a lot of time; as many as 25 Pearls can appear on any of your spins and the reward will be well worth waiting.

The Treasure Pearl Feature awards 10 free spins with reels stripped of all symbols except for Pearls and blanks, and each Pearl payout you score multiplied up to 5 times. Using this unique mechanism, RTG has created a game with a maximum win potential of 12,500 times bet per way. All you need to do is wager 20 credits per spin and start accumulating those shiny pebbles.

Win at Home, Win on the Move

Same as all other Realtime Gaming titles, Mermaid’s Pearls slot will simultaneously become available for desktop and mobile play. You’ll be able to access it via the internet as well as the downloaded software as soon as it becomes part of Grande Vegas library. Owing to the unique mechanism combined with a popular theme and the potential to deliver substantial payouts, we have no doubt this medium variance slot will soon gain more than a few fans.