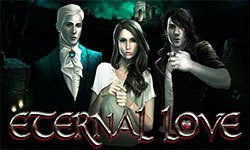 2016 has really sunk in and Realtime Gaming is making sure that Grande Vegas Casino players have a lot of new games to play and new ways to win. One of those new games is a release that is sure to warm the hearts of everyone who plays on the instant play, mobile and downloadable casino. Titled Eternal Love, the game has not been fully revealed yet and RTG is keeping its lips sealed tight about what kinds of fun and exciting features this game will have, but we are pleased to announce that we got the scoop on just a few of the features you can expect to see.

The basics of Eternal Love

True, we don’t have all of the important info about the game just yet, but we do know that Eternal Love will be released sometime around the day of love, Valentine’s Day, in February. The developer has also revealed that the functionality and the ways in which players can win will impress just as much as any of the new game releases, and with up to 243 possible combinations that could result in a win, Eternal Love will not only be heart-warming, but should be fairly profitable too. The game is an all ways pay game, which means that though most symbols pay from left to right, the scatter symbol combinations will pay in all directions. The game’s top award is rumoured to be a huge 50 000 times the original wager per way too, so if you’re hoping for the chance to win big bucks, this is the way to do it.

The game’s wild symbol is the Eternal Love logo and this will be a grouped wild appearing only on reels 2 and 4. This wild will also act as a filled symbol, which means it can be used to substitute for all other symbols (other than the scatters that is) and should it manage to complete a winning combination for you, will even multiply your payout by as many as three times. And who doesn’t love a good multiplier, right?

The scatter symbols are also the keys to unlocking the free games feature, which works according to a life force meter, which is a gauge that hides a certain win amount which could be up to 100 times what was bet. Now here’s where the fun begins. Players are given 10 free spins which they can use to try and get the figure that is hidden in the life force meter (but you won’t know what this figure is until the free spins are over) and should they manage to get the same amount or more, they walk away with the money. However, players who don’t manage to hit that amount are pushed into the extended life feature, where they just get more and more free spins until they hit that set amount. Clever!

Be sure to keep checking back at Grande Vegas Casino to find out the release date of what is sure to be a game everyone will love!