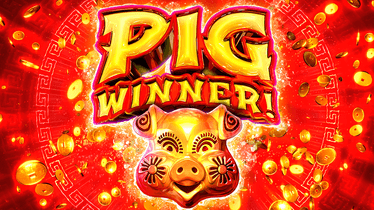 Asian tradition is something that RTG has tackled before in numerous video slots which have come to enjoy great popularity among the players. The company is obviously still inspired by intricate Asian themes, as they are always abundant in symbolism and traditional aspects. Their latest slot game called Pig Winner is another one to join the genre and shed light over the subject of the Chinese zodiac and the tradition of celebrating the beginning of a new year on the traditional Chinese calendar.

According to the Chinese zodiac, or shengxiao, each year is represented by an animal, and it is a repeating cycle of 12 years. The animals are: rat, ox, tiger, rabbit, dragon, snake, horse, goat, monkey, rooster, dog and pig. The year 2018 was Year of the Dog, whereas 2020 will be Year of the Rat. The element attached to the 2019 Year of the Pig is Earth, which means that all people born this year will likely be communicative, popular among their friends and have a strong sense of time management. The zodiac signs are directly tied to the most important festival in China – the Spring Festival or New Year Celebration. Chinese New Year has a varying date, and this year it will fall on February 4th and the festivities will last for six days. There is yet to be a New Year Celebration in China without red decorations, firecrackers and fireworks, as well as spending time with family and presenting them with gifts.

Pig Winner online slot from RTG shows plenty of the mentioned elements of the festivities and tradition. The first thing to notice is the animal symbols, each representing a zodiac sign. They are beautifully designed and have a nice glow to them. RTG keeps the colours mostly balanced with red and gold dominating the screen. However, the icons break the pattern with green, yellow, purple, pink and blue, among other colours. Pig Winner is an all-ways-pay slot machine. Since it provides 5 reels and 3 rows of symbols, there are 243 ways to win in total.

The pig symbol is the substitution icon and it appears in groups on reels 2 and 4. It substitutes all regular icons, but it won’t replace the Scatter. When it appears in the base game it doubles the prize. The Ying Yang symbol is the Scatter and it takes at least 3 of them on one spin to trigger the main bonus round and win 8 free games. The freebies come with extra Wilds and added Ying Yang symbols for a greater chance of winning. It is possible to retrigger the bonus up to 2 times, and there is also a tiny detail of enjoying triple pays from 8th free spin onward with each pig Wild that appears.

Oink for the New Year

Set up the fireworks and start the countdown because the Pig Winner slot is about to drop at Grande Vegas just in time for the actual festival. As of January 30th you will be able to try out this feel-good game on mobile and desktop versions of Grande Vegas Casino and try to score its max payout of 200 times the stake. Pig Winner lacks a jackpot but it certainly does not lack the spirit of the holidays and a long-standing Chinese tradition.