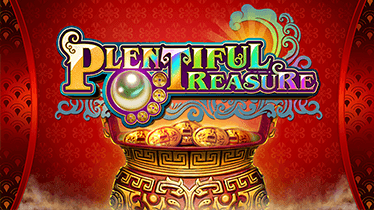 With Plentiful Treasure hitting the online Grande Vegas casino floor, the term ‘treasure’ suddenly has a deeper meaning than just a pile of money or valuables. The idea of wealth is a part of Asian tradition and the video slot Plentiful Treasure from RTG incorporates many elements that can be associated with happiness, wealth, prosperity, and good luck. For one, the colour red is involved in the theme just like any of the symbols on the reels. In Chinese tradition red represents power, and it is believed that red brings wealth. It is attributed to royalty and it wards off the spirits of bad fortune. The background to Plentiful treasure is entirely red, which gets any players hyped and ready to begin their hunt for the greatest of Asian treasures.

Plentiful Treasure is a 5x3 video slot machine with mesmerising graphics and suspenseful, oriental backing sounds. Developed by Real Time Gaming, a proven provider with great knowledge about Asian themes and imagery, Plentiful Treasure delivers the best from Chinese culture - related to wealth and prosperity. The game is played with 243 ways to win in any direction and includes standard playing card symbols and interesting items such as jewellery, pots made of gold, ingots and more.

Plentiful Treasure slot benefits from a substitution symbol - Bao - which means ‘treasure’. Bao appears on reels 2, 3 and 4 and counts for all symbols except for the Pearl, which assumes the role of a Scatter icon, but also acts as Wild in specific situations. Pearl appears only on reel 3 and counts for all symbols except Bao and Tripod. The Tripod is the real Scatter and three of them activate the Free Games Feature. The bonus free games remove all low-value symbols from the screen and the player enjoys 8 freebies. As for the Pearl symbol, it awards multiplied payouts for each winning combination it forms part of. The bet multipliers are applied as follows: 1/8 = x1, 1/18 = x2, 1/38 = x3, 1/68 = x4, 1/88 = x5. Why the eights, you may wonder? The number 8 is the luckiest number in Chinese culture! It is synonymous with success and 88 is even better - it means ‘double happiness’.

Watch out for the Bao symbol, because it may trigger the Golden Coin bonus. In this special feature, the players get to pick among 12 golden coins. Each click or touch on the coin reveals the symbol which corresponds to one of the four available jackpots. If the player manages to match three identical symbols, he or she will score the corresponding jackpot. As mentioned there are four jackpots to be won in Plentiful Treasure - the Minor, the Mini, the Major and the Grand Jackpot. These jackpot payouts start at predetermined sums: $50 for the Minor Jackpot, $250 for the Mini Jackpot, $1,000 for the Major Jackpot and $5,000 for the Grand Jackpot. With each bet, the jackpot amounts grow larger!

Whether you decide to play Plentiful Treasure on your mobile device or computer, Grande Vegas will make it possible and equally enjoyable. You just have to wait for November 1st - on this date Grande Vegas will welcome Plentiful Treasure into its library and all registered players will be able to get a taste of what it’s like to be rich, Asian-style!