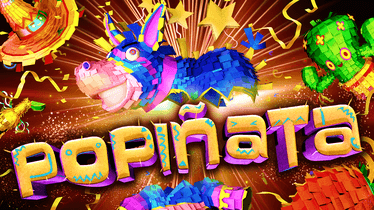 Piñatas were not always a fun party game in which the guests wearing blindfolds would attempt to break the container with a stick and get their hands on tasty sweets. Centuries ago in China, shaped like a cow or an ox, they used to contain seeds instead of candy. Breaking them was meant to ensure a favourable climate for the next growing season. Since then, the tradition has travelled first to Europe and then to Mexico, each time taking on different meanings. When you hear the word piñata today, it’s likely you’ll think of fun and games. And when talking about fun and games, Realtime Gaming sends us Popiñata, a highly entertaining 5-reel and 9-payline video slot. Are you curious to know what kind of treats RTG piñatas contain? Then come join the party and find out!

Since the majority of us associate these fun candy containers to Mexico, RTG has decided that’s where they’ll organise their piñata party. Two solitary cactuses decorated by festive lights illuminate the night in a Mexican desert, while an invisible band plays a catchy mariachi tune. Party is in full swing, the only thing missing being a player who will spin the reels and get those piñatas to explode. And they will, each time you manage to land identical symbols over 9 paylines or less. They will pay left to right as well as the other way around, potentially helped by a Wild Donkey piñata. The colourful Donkey will stretch up and down to commandeer the entire reel and provide more and bigger payouts, potentially as much as 250x your line bet. Once you receive your win, the extended Wild will trigger a re-spin of the other reels, while it freezes its own. Get more Donkeys to join, and consecutive re-spins might cause a dizziness which you’ll, for once, enjoy.

Don’t bother with presents, this is the kind of party where, with a bit of luck, we’ll do the gifting. Just make sure to mark April 19th in your calendars and show up to do some piñata-bashing. It could prove to be as profitable as it will be enjoyable! And stayed tune in meantime, as Grande Vegas is about to add another new RTG slot to the gaming catalogue. When you’re done partying, we’ll give you the chance to experience a different kind of fun by hanging out with the Purrfect Pets.