Rudolph Awakens in Time for the Christmas Season 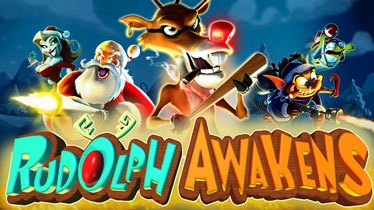 Realtime Gaming loves Christmas just as much as we do and thus continuously treats us to fun Santa stories unlike any we’ve been told while still well below the legal gambling age. This year, Rudolph goes against Santa once again in RTG's new Rudolph Awakens video slot and he's willing to enlarge your Christmas budget by as much as 50,000x the line bet. Santa's in for a surprise as our favorite reindeer showcases new skills and demonstrates a few new tricks.

He'll cover entire reels and launch free games entrapped in a block of ice until his Elf sidekick melts it and sets him free. Rudolph will wake from his slumber in a few weeks to appear at Grande Vegas on 27th November so you'll have plenty of time to enjoy the Christmas season in the company of Santa's former ally.

The new game uses 5 reels and 30 variable paylines with all symbols paying left to right. All action takes place, where else than at the North Pole where Santa uses heavy ammunition to break down the mutiny. Wild Rudolph appears on reels 2, 3 and 4 and subs for all other icons except for Extra Games. During the base game, he nudges on reels 2 and 4 to cover all reel positions before paying what's due. The same magic happens on all three middle reels during the bonus round.

When the red-nosed reindeer stretches all over the middle reel, he'll trigger the Rudolph Awakens feature. The rebellious Rudolph starts off frozen in a block of ice so he'll have no choice but to stay put until it melts; in the meantime, the Wild middle reel will help generate a few majestic winning combos. Players are initially awarded 10 free games but there are 3 more to be won each time you land Extra Games symbols on reels 1 and 5. Additional spins may be awarded a maximum of three times.

Rudolph is currently sleeping, gathering his strength for the next round with Santa. While waiting for him to wake up, remind yourself how this this funny feud started by playing previous two sequels. Rudolph first went Wild in Rudolph's Revenge, an entertaining video slot which features a progressive jackpot as well as free games with multipliers and extra substitutes. The mutiny continues in Return Of The Rudolph in which the rebellious reindeer has the power to triple payouts while Scattered Thugs launch a pick feature with the choice of three interactive bonus rounds.

Special features may be different as Rudolph Awakens this year but the high win potential is still there; with a bit of luck, players can collect up to 50,000 times their bet per line. Don't forget: this new Christmas-theme video slot becomes available at Grande Vegas on 27th November and you can give it a try on mobile devices as well as desktop computers.