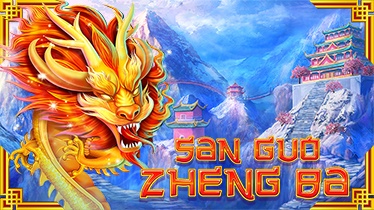 China has a long and rich history, but the Three Kingdoms (AD 184/220–280) periods remains as one of the most impactful eras in Chinese chronicles. Not so fruitful in terms of art, the Three Kingdoms period became influential later on, spurring many works of historical fiction such as the novel Sanguozhi Yanyi (Romance of the Three Kingdoms), which is one of the most celebrates examples. As an homage to that portion history,  San Guo Zheng Ba revives the trio of warring Chinese states, Wei (魏), Shu (蜀), and Wu (吳) and reflects on the moment that preceded the fall of the Han dynasty. It was a time of technological advances when it comes to warfare, and a time when invasions and battles marked history. Strangely enough, this historical period has been greatly romanticised in the major Asian cultures.

Now we have a video slot about the three kings who each proclaimed himself the emperor of all of China. The graphics do justice to the splendour of Chinese nature, tradition and architecture; the colours are bright and varied. The special symbols relate to the theme: the Emperors symbol is the Scatter, whereas the Golden Dragon acts as Wild. These are the icons you need to pay attention to, as well as the grouped Empress symbol. The Golden Dragon appears exclusively on reel 3 during standard play; the Scatter can appear anywhere and pay out wins regardless of the paying lines. There are 50 adjustable win lines in San Guo Zheng Ba, a machine with a regular number of reels - 5.

The two main special features, the San Guo Zheng Ba Free Games and the Super Spin Free Games round, add to the suspense and excitement - not to mention to the balance! The one thing you need to do to trigger the free games is land 3 or more Scatters on a single spin. The reward is 5 free plays, and at the end of those freebies you’ll get 3 Super Spins within the Super Spin Free Games round. During initial 5 free spins, all wins are doubled that contain Wilds and it takes only 2 Scatters to win a corresponding prize. You can retrigger the feature up to 5 times and enjoy both the free plays as well as additional perks of the Super Spin Free Games feature such as added grouped Empress symbols, more Wilds, expanded Wilds, multiplied wins and boosted Wild wins. Who would have guessed any insight into treachery and revolt might pay off so well?

San Guo Zheng Ba video slot may be inspired by a large-scale civil war but the prizes are lovely; don’t worry, there will be no depiction of blood and gore, only victory! The highest reward is worth 50,000 times your bet per line, so man your battle stations and get ready for spinning the reels of San Guo Zheng Ba at Grande Vegas. The fight for a bigger balance and the throne of China starts on May 23rd!