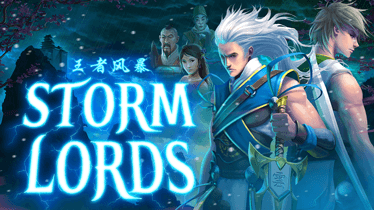 Real Time Gaming is preparing to launch a new feature-rich video slot machine and we will be right there in the front row to see it happen. The game will be available at Grande Vegas as of August 21st, so get ready for some spinning, samurai style! Storm Lords is the new game’s title, and the slot is about two ancient spirit warriors, fighting against evil vibes and evil sorcerers. There’s also a girl in the mix, but aren’t exactly sure if she’s someone’s love interest or simply a pretty face to look at while we’re spinning the reels. She may be the source of the strength of the Storm Lords, and we always want to good guys to win.

As mentioned, the game is set in a remote location in the mountains, we see there’s snow and also cherry blossoms. A shrine with a pagoda rooftop frames the reels – the game benefits from a standard, familiar 5x3 configuration. The graphics are stunning and the design is close to anime representations we see on television or video games. The two main characters are the Storm Lords, one has a green attire and a katana sword, while the other one has long silver hair and a huge sword, like the ones you would see in World of Warcraft. Other characters include a girl in pink and a man who might be a martial arts master or an evil wizard perhaps. Either way, the expression on his face tells us he is not happy. There is also a young man in a strange yellow outfit – it’s not clear which side he’s on. Low-value symbols are playing cards from 9 to Ace.

It’s essential to pay attention to the two warriors, as they are Wilds. They appear only on reels 2 and 4. As soon as they land, they will cover the entire reel and a majestic animation will mark their unlocking. Storm Lords are able to replace any symbol, except for the Scatter Amulet and the Bonus Treasure Coins. The Treasure Coin Feature is triggered when 6 or more Treasure Coins appear anywhere, 3 re-spins are awarded to the player while the coins are held in position. It takes 3 or more Scatter Amulets to appear on the screen to activate a choice of 2 features: Wild Reels or Treasure Spins. Whichever option you choose, you will enjoy 6 free games. The additional elements will differ, as you will either have the Storm Lords held in position on reels 2 and 4 or Treasure Coins held in position on reel 5.

Ride the Storm Out

If you can take the pressure, endure the wind and the snow, stay clear from the thunders and lightning, you ought to do good at this game. Storm Lords slot will be on offer at Grande Vegas no later than August 21st, through the casino’s mobile and desktop lobby. Get ahead of the others and play for the Grand Prize!