T-Rex Returns Bigger and Stronger Than Ever 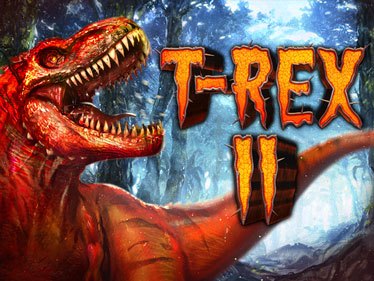 It may be a tad late to experience the power of dinosaurs in real life but, thanks to Realtime Gaming, you can still play with T-Rex and its friends in the virtual world. RTG's T-Rex video slot has clearly become popular enough to trigger the creation of what will doubtlessly turn out to be an equally successful sequel. In T-Rex 2, our favorite prehistoric creature returns bigger, stronger and hungrier than ever before. It will eat others of its kind to help you win more and plant eggs capable of awarding up to 100 free spins at once. Add to that two progressive jackpots waiting to be triggered at random and you've got all the ingredients needed for an exciting adventure which will take you 200 million years back into the past.

T-Rex 2 retains all elements we loved in the original title – Wild icon which doubles payouts, Scatters that trigger free spins with reels frequented by hungry T-Rex, and a continuously increasing top reward called progressive jackpot – and makes it all even bigger and better.

You will still get 25 flexible paylines to win over but it will now be easier to score thanks to T-Rex becoming a grouped Wild which always shows up on reel 1. He's starving during the base game as well as once the feature gets triggered; even before you manage to activate free spins, T-Rex will choose to eat up his buddies appearing on other reels and transform Triceratops, Suchomimus or Raptor into additional T-Rex Wilds. This is called the T-Rex Terror Wild feature and you'll see it more often when 3 or more Scattered Eggs make simultaneous appearance.

The number of Scatters is directly related to the number of free spins: land 3 and you'll get to play 10 free games, 4 will give you 20 spins on the house and 5 as many as 100 free spins. The feature's win potential is massive as not only does T-Rex keep gulping down other dinosaurs but you can add extra spins to those already won.

Win Up to 5,000x Bet on Desktops and Mobile Devices

As of September 25, T-Rex 2 will be available to play online via desktops and smartphones as well as downloadable software and apps. The device you choose will in no way impact the quality of the experience as visually and content-wise the game remains exactly the same. Owing to a number of great special features, players can win as much as 5,000x their bet line. Instead of a single progressive jackpot featured in the original title, they will have a chance to collect one of the two - Minor or Major. Why shouldn't you be one of the first to celebrate massive payouts?