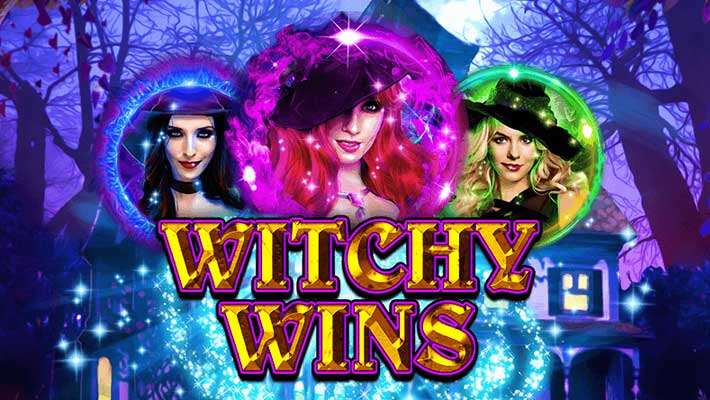 Double, double toil and trouble…a slot so cute, it deserves a cuddle. Three witches are the stars of this great 5x3 video slot by Real Time Gaming that boasts 243 ways to win, without even mentioning the different bonus features you’ll come across. Worry not, by the way, we’ll come to those in a minute anyway. With witches around, this is no place for the feint-hearted, and the background is suitably eery and ominous for a lost of this nature. Good thing the Witches are super cute, then.

A blonde, brunette and red-headed witch? Yeah, it’s Witches of Eastwick all over again (Michelle Pfeiffer was our favourite, seeing as you asked) and those three Witches are the highest-paying symbol, with cauldrons and potions also paying well. Ace to nine playing cards? Yeah, they’re there as well but we don’t talk about them. They’re not worth that much, they’re rather dull and they seem to be present in most slots so that’s the last we’ll speak of them, specially because we have far more interesting things to discuss. It’s optimised for both desktop and mobile.

What’s brewing in there?

They say good things come in three. And they do here as well. Three witches, three special features, three sets of free rounds and three potions. Let’s talk about cauldrons. They’re the Wild and with the exception of the Scatter, can substitute for any symbol. Occasionally, they turn into a Multiplying Wild and as the name suggests, they multiply your wins. By four in this case. The Scatter isn’t hard to pick out. It says ‘Scatter’ on it. The first good thing about is that it’s a high-paying symbol so you’ll bank some cash along the way most of the time when it shows up. But this Scatter symbol is no one-trick-pony. Far from it. In fact, the Scatter’s ‘other job’ is what really makes it so valuable and such a magical appearance here on the reels. When there are three, four or five of them appearing, they’ll give you 8, 15 or 20 free spins respectively.

Can you handle the cauldron’s heat?

And can you face your fears and play this slightly scary slot? Course you can, especially with those exciting bonus features, generous free spins and 243 ways to win.

The new game from Real Time Gaming is ready to place a spell on you. There are three lovely witches ready to keep you company in the garden of a creepy mansion. But don’t worry, these are good witches! Witchy Wins has a cauldron full of special features including an almost mystical 243 ways to win. Start spinning and you might find the cauldron, which is the Wild of the game. But all is not as it seems in this enchanted world. At any time, the Wild can be transformed into a Multiplying Wild and reward you with up to four times your winnings.
Hit three scatters and you’ll draw back the curtain on the witches’ den to find up to 50 free spins. This is where the magic really happens!