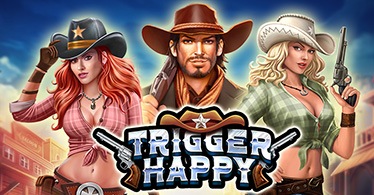 After releasing their mind-boggling “slot” Cubee and a Chinese-themed celebratory game Pig Winner, RTG has gone in a completely different direction with its latest title Trigger Happy. The new game is all about the dangerous accounts experienced by American westerners in their daily lives on the frontier and will be available at Grande Vegas from March 20th.

A period so romanticised by movies and picked apart by historians, the Wild West still remains a fascinating topic. The American Old West stretches through history from the English colonial settlements in the early 17th century to the admission of the last states in 1912. The quintessential symbol of the American frontier is the cowboy, a fierce rider and gunslinger who could easily turn into an outlaw in a society struggling to keep things orderly. The Trigger Happy slot undoubtedly invades the frontier territories, but instead of focusing on the cowboys it brings emphasis over to the cowgirls, equally audacious and witty as your average buckaroo.

The backdrop for Trigger Happy is some sort of a settlement, an outback town which looks rather peaceful until you spin the reels and bring the bandits onto the scene. The main protagonists of the 5-reel, 30-line slot are two cowgirls; one is a blonde and the other a redhead. Both appear on the reels as substitute symbols, replacing regular icons, but not the Scatter. Redhead cowgirl symbols can land grouped on reels 1 and 2, whereas blonde cowgirl symbols can appear grouped on the 4th and 5th reel. Pay attention to the shiny sheriff badge, as this is the Scatter. Other than providing wins beyond the payline system, the Scatter makes sure you have the chance to trigger free spins every now and then.

With as much as three Scatters on a single spin, you get the opportunity to experience the Trigger Happy feature and pick between two versions of the bonus: Redhead Cowgirl or Blonde Cowgirl. Fiery red hair means the Wild will either cover the first reel during free spins or it will count as a Scatter once per reel during the round. The blondie can cover reel 5 during free play or cover both reel 4 and 5 until you use up the freebies. No matter what you pick, you’ll get 7 free spins by default and with 3 additional Scatters you will be able to add 5 more. The main feature aside, Trigger Happy comes with another feature, this time it is triggered randomly. The Lucky Feature can happen out of the blue and award you with 5 to 10 free plays or activate the Trigger Happy Feature without Scatters.

Blazing a Trail to the Jackpots

Free spins, and then more free spins, is not the only thing you can obtain at random in Trigger Happy slot. The game also incorporates two accumulating jackpots with starting amounts at $ 250 (around 3,460 ZAR) and $ 1,000 (about 13,840 ZAR). You don’t need to win a sharpshooting contest to win them, only survive long enough and let good luck take care of the rest. On a related note, Trigger Happy offers a 1,000 times the bet maximum payout, which would also be good money to spend on luxuries like cattle or some land of your own…or whatever you decide is best. Giddy up!